Главная › News › Richard Branson will invest in the Ukrainian startups 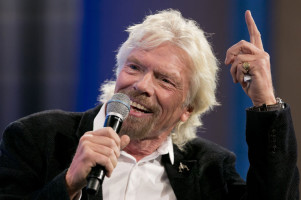 The well-known British businessman Richard Branson said at the World Economic Forum, during a private event “Ukrainian lunch” in Davos, that he is ready to invest  in the Ukrainian startups, told Andrei Kolodyuk, the  partner of AVentures Capital, who visited the event. He also said that he talked to Branson and discussed the issue about  investments in Ukrainian projects.

During the forum, Richard Branson, speaking at the same stage with the American billionaire George Soros and the head of the Ukrainian Ministry of Finance Natalya Yaresko, said that Ukraine  has prospects, firstly, in IT- sphere, and that investment in the Ukrainian startups are interesting for him.

In addition, during a conversation with Kolodyu, the  well-known businessman said that he meant financial and technical projects. According to the Ukrainian investor, Branson told him that he was pleased with investments in TransferWise, and he is also interested in investing in Bitcoin-  and blockchain- startups in Ukraine.

According to the billionaire opinion, now Ukraine needs a large number of young entrepreneurs who are thinking about how can they make better lives of people in the country. Branson said that the system  in Ukraine does not work very well, so people can build a business, trying to improve it, and that will be a start of entrepreneurial career.

According to Branson, it is also important to create jobs in native country. The billionaire said that in Ukraine a lot of extremely well-educated young people, eager to succeed. However, for some reason, they  want to go to the USA  to work on large technology companies, although they are able to build a successful business in Ukraine, to create the same companies and provide hundreds of jobs to their fellow citizens.

According to Branson, one of the biggest opportunities in Ukraine is energy saving, since every year the country spends a lot of electricity, and therefore definitely necessary to build an industry that will not only save a lot of resources, but also provide thousands of jobs.

Intel will sell for $ 9 billion divisions to produce memory chips

Intel Corp. sells to South Korean the SK Hynix Inc. unit in the field of manufacture NAND memory chips and the storage devices for $ 9 billion. The agreement includes manufacturing operations for NAND chips SSD-drives, NAND components and semiconductor wafers, said in the press release from Intel. SK Hynix will also receive the plant […]

The state financial institution Oschadbank won the Court in the Individuals Deposit Guarantee Fund (IDGF), and obtained the right not to return 2 billion UAH, that was  received from the Delta Bank. This was stated by FinClub. “The essence of the conflict is to try to return to the Delta assets that Oschadbank received from […]

According to the Wall street journal, the French regulatory authority has fined 20 firms engaged in the delivery for 672 million euro. The reason for this decision of regulators is financial fraud of companies, that administered prices through collusion for six years. The companies  violated the law in the financial sector and in the field […]