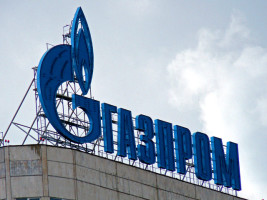 Antimonopoly Committee of Ukraine has fined the Russian company “Gazprom” for 85 billion UAH  for abuse  of monopoly power.

This information was announced by the head of department Yuriy Terentyev on his Facebook.

He emphasized that the “Gazprom” is a monopolist in the market of transit of natural gas through main pipelines on the territory of Ukraine.

This is the biggest fine in the history of the Antimonopoly Committee. The previous record was set in 2012, when was fined the Association “Mebeldrevprom” and its 14 members for anticompetitive concerted actions for 419 million UAH. However, the Committee penalties are almost never paid in full. Most of the decisions challenged by the committee (and often successfully) sued in the courts.

In late April, the antitrust authorities of the European Union presented to “Gazprom” the official charged with abuse of monopoly power in Poland, Hungary, Estonia, Latvia, Lithuania, the Czech Republic, Slovakia, Bulgaria. The Russian company was accused of creating artificial barriers to the gas supply from countries of Central and Eastern Europe, and setting unfair gas prices.

Then the prime minister Arseniy Yatsenyuk asked the AMC to institute a similar case. On May 13, 2015 the Antimonopoly Committee began proceedings against “Gazprom” for the abuse of monopoly power.

In late December, the AMC said that in 2009-2015 “Gazprom”, occupying a monopoly position in the market, constantly violated the terms of a transit contract with “Naftogaz” and ignored all appeals to change the terms of cooperation for mutually beneficial and economically viable.

It should be noted, that in the Stockholm arbitration court there are claims of Ukraine to “Gazprom” worth over $ 23 billion.

Britain intends to start vaccination against coronavirus in December

The British government hopes that in the coming weeks the relevant authorities of the country will register two vaccines against coronavirus. Boris Johnson, the Prime Minister announced it in an interview with Sky News on Monday, November 30. “So far, no vaccine has been approved for use by the Medicines and Medical Devices Agency. However, […]

Artemsol plans to open logistics centers in the EU

The American pharmaceutical company Pfizer may apply for permission to use its oral drug for the treatment of COVID-19, at the end of this year. This was announced on Thursday by the Chairman of the Board and Chief Executive Officer of Pfizer Albert Burla. “In addition, our scientists are developing an oral drug to treat […]