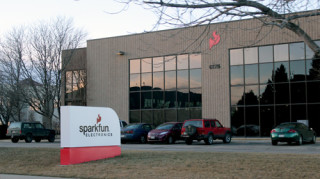 Ukrainian company Blynk, which develops software for creating its own IoT-applications, announced a contract with a major manufacturer of Electronics – SparkFun. In collaboration was created the product SparkFun Blynk Board. Blynk also entered the start package of the SparkFun IoT Starter Kit with Blynk.

The fact that the startup conducts negotiations with a major customer was said by the founder Dmitry Dumanskiy in an interview to the AIN.UA in February. “The most difficult month in my life is ended. We had 20 hours to work hard to close the contract with our partner, the SparkFun Electronics», – said Dumanskiy in his page.

The product resulted from the collaboration is the set “microcontroller + mobile app” that allows to configure the device for work under the user’s needs. Apart from the possibility to create own applications, there is a number of preset that you can use immediately in the starting package Blynk.

Established in 2003, the SparkFun is one of the largest retailers that sell microelectronics in the United States. The  Blynk was founded 2 years ago and has successfully completed crowdfunding campaign on Kickstarter, gathered  $ 50,000 instead of the required $ 10,000.

Here is our joint issue with the German-Ukrainian Chamber of Commerce and Industry!

Pfizer will test its COVID vaccine in children under 12 years of age. Radio Svoboda reported this with reference to the company’s statement. The study will involve up to 4,500 children in the United States, Finland, Poland and Spain. The drug is already approved for use in emergencies for adolescents 12 years and older in […]

Why “to speak about itself”  is so important for any business? In the conditions of the competitive struggle for money of the buyer bright, attractive advertizing is the integral attribute of successful business strategy. What is the main secret  how to make the prospective client purchase what you are  offered to buy for him ? […]