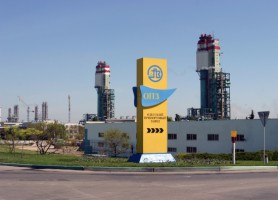 The Stockholm arbitration prohibited the  “Odessa Portside Plant”, PJSC to alienate non-current assets, according to the press-service of Group DF.

“March 31, 2016  the Stockholm arbitration satisfied the request of the  Ostchem Holding Ltd (included in Group DF) and ordered the OPP  till August 31, 2016 to refrain from alienation or encumbrance in any way methods of its non-current assets”, – said in a statement.

As noted in the press-service, the Ostchem appealed to arbitration with a corresponding request to protect their rights in relation to OPPs debt (including the planned privatization of the enterprise).

“The sole purpose of the Ostchem in  applying for arbitration is to return  debt of the OPP for the gas. The amount of formed almost 3 years ago debt of the OPP debt to the Ostchem (excluding fines, penalties and other losses) is $ 193 million”, – sums up the press-service.

As reported, the State Property Fund (SPF) of Ukraine intends to announce an auction on privatization of the “Odessa Port Plant”, PJSC in the second half of May and hold it in June.

The “Odessa Portside Plant”, JSC (OPP) is one of the largest enterprises of chemical industry in Ukraine.

The OPP specializes in the production of ammonia, urea, liquid nitrogen, carbon dioxide, liquid oxygen, sodium sulphate. It is also engaged in an overload of chemicals entering from CIS countries for export (a monopoly on the Ukrainian market for the reception, cooling and transshipment of ammonia).

Johnson & Johnson has found a batch of coronavirus vaccine that does not meet quality standards, the company said. Supplier Emergent BioSolutions at a plant in Baltimore manufactured the batch. This batch was not poured into ampoules and was not admitted to the final stages of production, the report said.   Against this background, shares […]

According to the State Statistics Service, as of January 1, 2017, there are 15 206 join-stock companies registered in Ukraine, 3 122 of which are the public companies. Although the Ukrainian independence celebrates its 25- year anniversary already, only recently the national business has started to review the governance system and the system of effective […]

SFGCU initiates a revision of the credit rate

According to Interfax-Ukraine, the  State Food and Grain Corporation of Ukraine  (SFGCU) will initiate a rate decrease. The Eximbank of China  issued the credit to the corporation under Ukraine state guarantees in the amount of 1,5 milliard dollars in 2012. Oleksandr Hryhorovych, the acting CEO of SFGCU said: “We work on the very important issue. […]