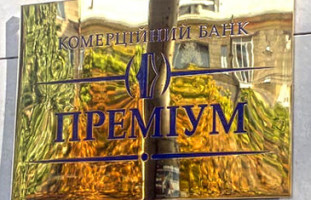 National Bank of Ukraine adopted a decision to revoke the banking license and liquidate the PJSC CB “Premium” for  violation of banking legislation in the sphere of financial monitoring.

This is stated in the resolution of the National Bank № 68 / BT, dated February 10, 2016, said the press service of the regulator.

“The facts of violations were established during an unscheduled on-site inspection of PJSC CB “Premium” for financial monitoring issues”, – said the service press.

The National Bank noted that the liquidation of the bank will have no impact on the stability of the financial market.

“Guarantee Fund deposits of physical persons will be paid in full means 97% of the Premium bank’s depositors”, “Total Fund will provide a guaranteed payment of the sum in the amount of about 150 million UAH”, – said in a statement.

As previously reported, on February 10, the National Bank decided to classify PJSC CB “TC Credit” to the category of insolvent due to the lack of transparency of ownership structure.

Earlier media reported that the head of the bank’s supervisory board was Sergei Dumchev, who ran for mayor in Kiev in 2015.

As earlier reported, the NBU first announced bank a bankrupt due to non-disclosure of the owners.

In the first quarter of 2021, the net outflow of foreign direct investment from Ukraine amounted to 301 million dollars. This was reported on the website of the National Bank. At the same time, negative reinvested earnings of $ 141 million were recorded. According to the NBU, investments in equity (excluding reinvestment of income) amount […]

Current and former Deutsche Bank staff have been questioned by the Serious Fraud Office in recent weeks in relation to the investigation into Libor rate-rigging. Traders have been interviewed about the manipulation of the London interbank offered rate and its euro counterpart, Bloomberg has reported. The interviews come shortly after the conviction of former UBS […]

“Svarog West Group” will direct $ 3.5 million for innovative projects in 2016. That was said by the chairman of the Corporation Andrey Gordiychuk in an interview to the AgroPolit.com. According to him, the investment “appetite” of the company significantly decreased in 2016. “But this does not apply to investments in research and development: ours are IT-solutions, […]

Google has appealed France’s fine of half a billion

The American multinational corporation Google, fined in France for copyright infringement, has announced its intention to appeal the decision of the French regulatory authorities. This was announced on Wednesday, September 1, the chairman of the board of Google France Sebastien Missoff. “We do not agree with some legal nuances and consider the amount of the […]

ConocoPhillips is in talks to acquire rival Concho Resources

American oil and gas giant ConocoPhillips is in talks to acquire rival company Concho Resources, Bloomberg agency reported, citing to the sources that familiar with the matter. “Companies may announce the operation in the next few weeks,” – say the interlocutors of the agency. However, there is no final decision yet, and negotiations may fail. […]