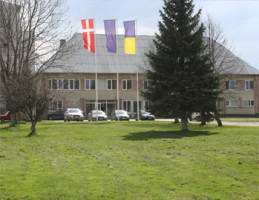 The “Galychyna Zahid” company concluded an agreement with the Danish IFU investment fund of attracting € 8 million to increase the production capacity. Previously, the company announced the suspension of the implementation of the project for the pig farm construction.

As previously reported, in September 2015, the first General Director  Deputy of the company “Galychyna Zahid ” Andriy Talama  announced about the suspension of the project for the construction of the pig farm with a capacity of 50 thousand heads a year in the Lviv region and the intention to resume the project and begin construction in early 2016.

“Galychyna Zahid” is  a company with Danish investment, founded in 2006 in the Lviv region, engaged in the cultivation and sale of pigs. The company has its own compound feed mill with a modern laboratory. The company “Galychyna Zahid”  was one of the first in Ukraine who introduced the breeding pigs into authorized fund.

The company sells about 115-120 thousand pigs in live weight per year, and the introduction of the new pig farm for 50 thousand heads will help to increase the sales up to 170 thous. heads per year.

The rating of the most expensive brands of Ukraine appeared

Shares of Intel fell 2.6% in non-trading time after the American chipmaker announced its results for the first quarter and gave a forecast for the whole of 2021. The main figures of the Intel report Intel reported earnings per share decline in the first quarter of 4% (compared to the same value in 2020) to […]

The National Bank of Ukraine (NBU) has adopted the concept of a simplified merger of banks. This was announced by the Head of Department of registration and licensing issues of the NBU,  Alexander Bevz,  writes the FinClub. At the same time,  before that the regulator has tightened the requirements for small banks. Those who will […]