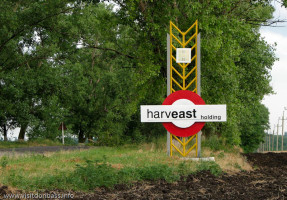 HarvEast Agro, together with the heads of the state district administrations and district councils in the territories of the company will determine the presence of social finance projects for 2016. The parties have agreed this on this year’s first collective meeting, which took place in Mangushevskyi, Volodarskyi and Volnovakhskyi districts, Donetsk region. In the near future there will be a meeting in Velikonovoselkovskyi district. It is reported by the press service of the holding.

Total in 2016 the HarvEast plans to allocate about 3 million UAH for the implementation of social projects in areas where there are employees, shareholders of the company and members of their families. The amount of funds for each district is determined depending on the area of ​​land cultivated by the Company. Two-thirds of the budget will go to the social projects, the rest – for the provision of financial assistance.

Until March the heads of the regional state administrations and district councils, together with the heads of village councils will choose the priority projects in their areas. After that, there will be a meeting with representatives of  the HarvEast for distribution of the company’s social budget for 2016.

“From this year the HarvEast proceeds from the financing point of social initiatives to the system participate in solving regional problems by implementing the international standard of social responsibility. We found a local support. Without the development of society and solving important social problems in the territory of business activities of the Company the business will not be able to fully develop. Therefore, we will continue to fund the social development of villages and districts. But this should be a system interaction, aimed primarily at the development of socially significant infrastructure. Of particular interest are projects in water, health, education, and increased activity of communities, “- said the HarvEast PR-manager Helen Zubareva.

For the first time in Ukraine, a list of critical infrastructure banks has been compiled

For the first time, the National Bank has identified a list of critical infrastructure facilities in the banking system of Ukraine. This was reported on the regulator’s website on Friday, April 23. It is noted that such powers of the NBU are provided by the Law on Basic Principles of Cyber ​​Security of Ukraine. “Objects […]

The Supreme Court declared Astra Bank insolvent, the press service of the National Bank reports. By its decision, the Supreme Court overturned the decisions of the Kyiv District Administrative Court and the Sixth Administrative Court of Appeal, which found the central bank’s actions illegal. The NBU reminded that Astra Bank is the only bank that […]

Swedish traditions with a Ukrainian soul

HOW IT ALL BEGAN Sweden, the homeland of the Lantmannen concern, has rich traditions of farmers unions. Those unions were established on the principles of democratic governance, quality control, fair profit distribution. The Lantmannen company was set up on the basis of one of those principles in 1880. Over 100 years, the company has been […]