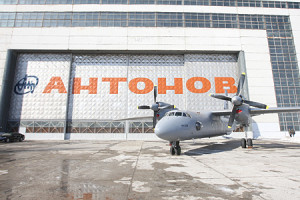 SE Antonov  and Taqnia Aeronautics Co., signed an agreement on cooperation in the organization of  the aircraft manufacturing complex for production of aircrafts  An-132. This is stated in the press service of the Antonov.

The document contains specific plans for delivering, organizing operation, after-sales support of Antonov aircrafts  families of AN-132, AN-148 and AN-178. It also relates to further work on the launch of the cooperative production of AN-132 in Saudi Arabia.

“There has been a very important event in the  cooperation with partners from Saudi Arabia, today we have made a concrete step in our business relationship, which is based on prior agreements. This document can be viewed as a road map for our cooperation on joint programs”, – said the director of the Ukrainian company, Mikhail Gvozdev.

It will be recalled, that in December, Antonov and Taqnia Aeronautics signed a “Memorandum of Understanding” to supply 30 multi-role aircrafts An-178 to the  Royal Air Forces of Saudi Arabia.

Antonov is the Ukrainian state aircraft manufacturing concern, which produces a series of aircraft “AN”. It was founded as an experimental design bureau at the Novosibirsk aircraft plant led by Oleg Antonov, since 1952 the company is situated in Kiev. The most famous models of aircrafts are: a light aircraft An-2 (“cropduster”), passenger aircraft An-24, large all-cargo aircraft An-124 (“Ruslan”), the largest airplane in the world AN-225 (“Mriya”).

Tesla Inc. paid its chairman and founder, Elon Musk, $ 3 million in compensation for D&O insurance to defend, settle disputes, or make court decisions. This was reported by Insurance Business. This insurance covers the expenses of the members of the board of directors, which are not included in the general expenses of the top […]

The American company SpaceX will launch the first Starship spacecraft into Earth orbit, most likely in 2021. It said its founder Elon Musk, speaking at a video conference on the problem of human flight to Mars, according to TASS on Tuesday, September 1. Mask was asked when the first test flight of Starship into orbit […]