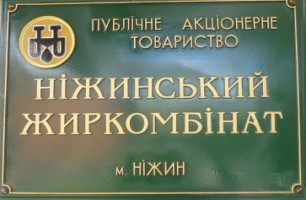 Nezhin fat plant (Chernihiv region) plans to build the first stage development of the multicultural oil-extracting factory on the basis of an operative concern before the end of 2016.

“Until the end of 2016 we will build the first stage on processing  of 1.2 thousand tons of sunflower per day”, – said the member of the Supervisory Board of the company Oleg Voloshchuk.

For the uninterrupted supply of materials, it is also planned to expand the capacity of the enterprise.

According to him, the company will supply sunflower oil to the EU, as well as to carry out the shipment via sea ports for longer distances.

“In 2017, it is planned to  build the second stage of the plant for the processing of 1 thousand tons of soybean, canola, flax”, – said Oleg Voloshchuk.

“Nezhin fat plant”, PJSC was founded in 1896 with the aim of processing of flax seeds. The company currently recycles a wide range of oilseeds, namely: sunflower, canola, flax, soybeans. The annual capacity of the plant for processing of seeds is about 150 000 tonnes. The main market outlets of the company’s production  are  Europe and Asia.

On Monday, Alphabet and ADT Inc companies announced a long-term partnership agreement. According to the press release, as a result, will be “a combination of award-winning Nest equipment and services based on Google machine learning technology, with a network of ADT installation, service and professional monitoring for creating a “smarter home” and integrated experience for […]

Shares of large American technology companies – Microsoft, AMD, Visa, Tesla, Netflix and Facebook – have been admitted to trading on the Ukrainian stock exchange PFTS. This was reported by the press service of the exchange. According to the results of April 15, the quotations (best bid) of the mentioned shares are as follows: Microsoft […]