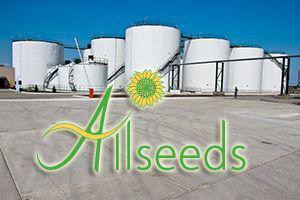 During the first phase of the implementation of technical specifications for the development of the transport infrastructure in the Yuzhnyi port, the Allseeds company packed 6 points and 900 m of the electrified tracks, established  3 shunting winches, performing works totaling for more than 25 mln. UAH, – says  the press -service of the company.

It is noted,  that the company also developed and transferred to the Odessa Railway Station the enhancement project of the “Beregovaya” station.

“For the further implementation of the investment project of the Allseeds company in Yuzhnyi port the transportation component, the processing capabilities of the wagons are particularly topical” – said the representatives of the company.

The Allseeds company is one of the largest manufacturers and exporters of vegetable oils and meals in Ukraine and has a reputation as a reliable and highly professional partner in agricultural markets. Allseeds also provides the services for transshipment of vegetable oils at its own terminal in the Yuzhnyi port – the deepest port in Ukraine.

Recently it was reported that the “Allseeds” company continues to invest in the development of its oil-production complex in the Yuzhnyi port. Now on the agenda is the construction of the second phase of the elevator with the increase of raw capacity for simultaneous storage from 80 thousand tons to 120 thousand tons, informs the press-service of the company.

According to the report, the structural elements of the elevator will be delivered already by the traditional partner of the Allseeds company – the Chinese company Jiangsu Muyang Group Ltd., the contract with which is already signed. The first consignment should arrive from China in July 2016, but now they are starting to build the construction of the foundations of the future silage towers to cope until the next harvest.

The company Amazon announced the launch of a new biometric technology Amazon One, allowing to customers to enter the store and pay for purchases by placing their palm on the scanner. However, users must first associate biometric information with the credit card. And then you can pay by placing the palm. This was reported by […]

According to the owner of a startup, the unit will help to put on the feet people, suffering from incurable diseases. Musk founded the startup Neuralink in 2016, the aim is to create a device that provides a direct link between the computer and the human brain. The device, which connects directly to the computer […]

In general, over the past 2 years, the real estate market has shown positive dynamics in almost all segments, especially since the situation has equaled both in the capital and in the regions. Let’s consider more different segments. THE RESULTS OF THE 4TH QUARTER OF 2017 AT THE OFFICE REAL ESTATE MARKET IN KIEV The […]