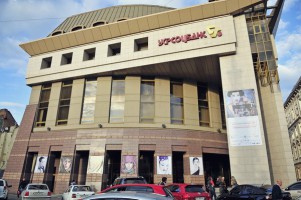 “Ukrsotsbank” obtained the criminal case against the “Creative”, –  reported Finclab.

In “Ukrsotsbank” commented that on January 14, 2016 by investigators of the National Police was opened a criminal case (№12016100000000014, Article 191 part 5) on the fact of abuse of office and embezzlement of “Ukrsotsbank” in large-scale by employees of agricultural holding “Creative”.

According to some media reports, the director of the department of “Ukrsotsbank” Sergei Tsarelunga was involved in corporate lending.

“We have started criminal proceedings against customers who have deceived the bank. In our opinion, the media “stuffing”, which we have seen in a number of some dubious media, were initiated in bad faith by the client as an attempt to force us to retreat to our desire to protect their rights and seek justice”, – said the General Manager of “Ukrsotsbank” (TM UniCredit Bank) Mauro Maschio.

He added that the bank has carried out an internal investigation, in which evidence of fraud in the actions of Sergey Tsarelunga, whose reputation in some media have been repeatedly tried to blacken by the black PR, was not found.

“On the contrary: Sergey has been and remains at the forefront of the defense of the legitimate rights of our Bank and other international and Ukrainian financial institutions relevant to the story”, – said Maschio.

According to him, fraudulent borrowers vis-a-vis the bank over the past several years contributed to the decision of UniCredit to leave the Ukrainian market.

“Moreover, this took place against the backdrop of an extremely difficult economic situation in the country. What’s next? We will continue to struggle with the customer, who stole the money from us, other banks and the Ukrainian society, and secretly withdrew the capital abroad. We will not stop to defend his innocence because of such attempts to defame us, “- said Mauro Maschio.

China and Korea are investing in Ukraine?

In Ukraine this year can begin flow the investment from Korea and China. It became known from the message of the investment portal InVenture. This development scenario is possible with the signing of an agreement on free trade zone with China. About potential investment operations notified Oleh Ustenko – Executive Director of the company, which […]