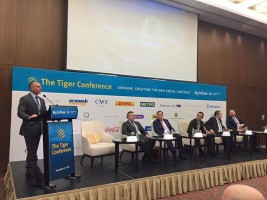 Today, December 2, 2015, in the capital «Hilton» hotel passes the fourth international “The Tiger Conference”, which is devoted to energy issues, the new economy, leadership, and the rule of law.

The conference was attended by over 300 of heads of domestic and foreign companies as well as government leaders and public figures. Representatives of the conference discuss the most topical legal and economic questions in Ukraine.

Among the controversial issues discussed at the conference, the main are:

– Questions of leadership dedicated to the fact that for many years Ukraine has suffered from external interference in its destiny. The discussion aims to determine how the government leaders to create national unity and a common vision for the future;

– Discussion of the energy problem includes questions on subsidized prices for electricity for the population, and how Ukraine to move to a transparent market pricing, which would stimulate production, efficiency and conservation;

– Issues of the Ukrainian economy, which is mired in corruption and bureaucracy of Soviet times. Monopolies, unfair subsidies, price controls, all this hampers the development of the economy. What should be the economy in Ukraine and what is to be done?

The organizer of “The Tiger Conference” by leading Ukrainian English-language newspaper “Kyiv Post”, supported by the Law firm “Syutkin & partners.”