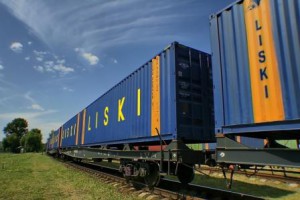 The container operator of the Ukrzaliznytsia the Liski Company, plans to create Portside grain terminal with a capacity of about 15 thousands TEU in a year. It is reported by the UkrAgroConsult.

According to the report, the new facility will be located in the territory of the structure Odessa-Liski, which serves the container flows of the “Big Odessa” ports (Odessa, Ilyichevsk, Yuzhnyi) in communication with a network of the  Ukrzaliznytsia.

It is noted that the terminal throughput capacity is planned about 1 thousand tons per day in the technological scheme of the car / waggon – container. The stuffing will be implemented in 20- and 40-foot sea universal containers. The project also includes a number of maintenance traffic – grain drying, grain conditioning (cleaning), aeration. The total cost of the project is 50 million UAH (about $ 2 million at the NBU rate); the source of the financing is own funds of the Ukrzaliznytsia. The project completion date is 2017.

“The existing warehouse for grain cargoes permits to keep up to 4 thousand tons at the same time. The processing capability for grain transshipment terminal in containers is: the Upload – 700 tons / day, and the load – 500 tons / day”, – said  in a statement.

It was planned that the first phase of the terminal will be put into operation in April 2016.

NASA has terminated a major contract with SpaceX

NASA has suspended a contract with SpaceX to build a monthly landing module, which cost $ 2.89 billion. It is noted that the company of Amazon founder Jeff Bezos Blue Origin and Dynetics have protested the decision to outsource the construction of the SpaceX module to the US Central Audit Office (GAO). SpaceX must now […]

The Danish company will combine its assets in Ukraine and Russia. It is reported by “ProAgro”. Antimonopoly Committee of Ukraine (AMC) gave the permission for the merger of Ukraine-Agro A / S and the Russian Pig Meat A / S (both – Holstebro, the Kingdom of Denmark). According to the resolution of the Antimonopoly Committee, […]

McDonald’s sells almost all of its business in China

According to one of the leading US companies – financial information provider Bloomberg L.P., McDonald’s Corporation already has a large share of potential buyers (80%) of Chinese fast food restaurants. The future owner of the assets turned out a syndicate Citic and Carlyle Group companies, which will buy a controlling stake shares of McDonald’s business […]