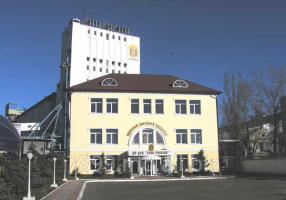 Bread of Ukraine, SJSC was artificially brought in a stalemate bankruptcy. Therefore, the only logical way is a total reorganization of the assets and liabilities of the company, and the beginning of the working subsidiaries. This was announced by the Chairman of the Board of the company – Igor Kobelia.

According to his words, as a result of 3 stages of the global reorganization of the company  from the  113 companies that were the parts of its share capital, only 6 working elevators and 5 administrative buildings stayed in the real subordination of the company.

He also said that the total amount of current liabilities of the company is 1.3 billion UAH, and in connection with inflationary finance charges and penalties that amount only increases annually.

“For the first time in the last 5 years “Bread of Ukraine” began the restoration of its core business. In 2016 it is planned to increase the monthly realization of flour in volumes of 500 tones, where the proceeds from the sale consists of 24 million UAH  per year”, – said Igor Kobelia.

According to him, the real way to solve the problem of the future viability of the company can be a legislative initiative.

Igor Kobelia also noted that there are two possible ways to solve the existing problems.

“The first is to create a new company (the alternative to the trader). And the second one is to create an agency for debt restructuring, which will increase the opportunities for the company to stay  consistent and to get out of the bankruptcy proceedings”- summed up Igor Kobelia.

Trump won: the companies begin to take out assets abroad

By the last calculations, Donald Trump has won  in the  USA elections . The majority of world editions have reported already about it which reputation don’t allow doubting the validity of this information . As  the Air Force reports, for the time being, the candidate of republicans  has collected 278 votes of delegates.  Hilary Clinton […]

The Antimonopoly Committee of Ukraine explained its fine to the “Gazprom” in the amount of 86 billion UAH refferint to noncompliance of contact relations from 2009 on gas transit through the Ukrainian territory by the Russian company, with the result that the “Naftogaz” lost significant incomes from the reduction of pumping volume of the fuel […]