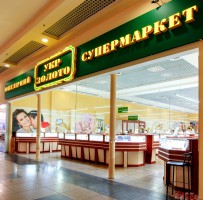 Ukrzoloto opens the  jewelry store under the brand “Golden Place” in Wroclaw (Poland). “For placing  the store the company chose a location in the largest shopping center in Wroclaw –“Aleja Bielany” , – says a member of the board of the “Ukrzoloto” Andrei Zhuk.

Andrei Zhuk also said the company plans to open another jeweler in Warsaw within three months.

“In general, we have big plans to open 20 stores in all major cities of Poland for two years, but we will take a decision on a more global market expanse after the opening of the first three stores and an analysis of their work” – he said.

Besides, member of the board of the “Ukrzoloto” said that the company is pleased with the results of the work of the first store in Poland, that was opened in December , 5 in the Outlet Bialystok shopping center (Bialystok).

“We estimate the work of the first store as well. We are satisfied with the sales in December. As for January and February, in these months is the low season throughout Poland, and sales are decreasing more than in Ukraine. But the important thing is that we go as part of a business plan” , – said Andrey Zhuk.

In general, he estimated the possibilities of the company on the Polish market in a high level, stressing that the economy of this country is one of the most stable in the European Union and the purchasing power of the population is constantly growing.

The Chain of the jewelry supermarkets of the “Ukrzoloto” today has 18 stores in 8 cities of Ukraine.

The defining reason for the depreciation of the hryvnia against the dollar and the euro in the third quarter was the deterioration of business expectations. Deteriorating expectations created increased demand for the currency, which turned out to be higher than supply. This contributed to the devaluation pressure in the foreign exchange market in the III […]

HarvEast Agro, together with the heads of the state district administrations and district councils in the territories of the company will determine the presence of social finance projects for 2016. The parties have agreed this on this year’s first collective meeting, which took place in Mangushevskyi, Volodarskyi and Volnovakhskyi districts, Donetsk region. In the near […]

Before starting flights, Boeing will need to comply with a number of regulatory requirements – retrain pilots and update aircraft software. Boeing shares in the premarket rose by 6.73% to $ 234.16 per share, according to previous trading data. The head of the US Federal Aviation Administration (FAA), Steve Dickson, has signed an order allowing […]

Boeing has recommended suspending flights of 777 aircraft after the incident in the American city of Broomfield, where large wreckage of the aircraft engine during the flight covered the streets. You can read it in a statement published on the company’s website. This applies to aircraft with Pratt & Whitney PW4000-112 engines. The company said […]