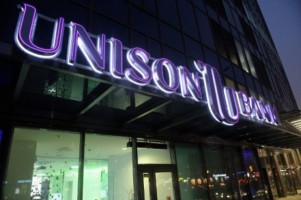 The shareholders of the Unison Bank filed two lawsuits to the District Administrative Court of Kyiv, demanding to recognize the illegal and to cancel the decision of the Board of the NBU on the recognition of the bank insolvent.

In the complaint the bank also requires to cancel the decision of the Deposit Guarantee Fund of individuals on the introduction of an interim administration in Unison. The bank also requires a legal procedure to cancel the decision of the NBU about the prohibition on the acquisition of a significant participation of shareholders of the Unison bank, – says the press-service of the financial institution.

“The shareholders confirm that the National Bank of Ukraine issued the unlawful decision  №189… because the  indirect parties of the bank took  all necessary steps to change the ownership structure of the bank, that is known in the NBU.

The bank argued that the NBU also violated the requirements of the law to comply with the 180-day period to eliminate shortcomings in the work of the bank, which are the basis for the revocation of the banking license and the introduction of the interim administration. “Thus, the regulator with its own illegal actions contributed that the bank classified as insolvent”, – noted in the bank statement.

The institution believes that this is a unique situation in the market, when a completely healthy bank,  which liquidity exceeds 2-3 times the need required by the NBU regulations for closure of obligations, has been declared insolvent.

“The bank’s shareholders regard this situation as a grand scale state raiding, and shareholders and the staff of the bank said they did not recognize the claims of the NBU, and therefore will continue to defend its position and rights in court”, – added in Unison.

The first truffle farm in Ukraine

French entrepreneur plans to open the first Ukrainian truffle farm in Kharkiv region. Edouard Henon,the owner of the oldest in Bordeaux truffle plantation, plans to organise a truffle farm in the territory of the regional Kharkiv park landscape .He is sure that all conditions, necessary for the cultivation of a delicacy, are in the Kharkiv […]

The Antimonopoly Committee has granted permission to the company EDAL Holding und Finanzierungsberatung GmbH (Austria) for the acquisition of a 50% stake in Investbank. This is stated in the committee report. “Granted the permission to the EDAL Holding und Finanzierungsberatung GmbH (Vienna, Austria) for the purchase of shares of Investbank (Odessa), which provides excess of […]