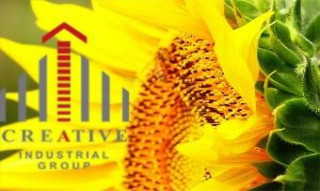 The commercial  court of Kiev had arrested UAH 380,712 million of Creative PJSC, which is one of the largest domestic producers of oil and fat products and part of  the Creative industrial group as security in the case  of VTB Bank.

According to the report, in January 2016, VTB Bank  appealed to the court to oblige the company Investment Capital Ukraine (ICU) to comply with the order to perform accounting operations of receipt / delivery of securities from 26 October 2015 to recover from Creative  PJSC in the plaintiff in the amount of debt 380 700 000 UAH.

The claim based on the fact that the Creative failed to make early redemption of issued bonds B series in violation of the issued prospectus, resulting in the indebtedness of 380.7 million UAH.

The Bank asked the court to recover the said amount from the agricultural enterprises, the hearing on the matter will take place in February, 8. As security for the claim, the financial institution asked to arrest the said amount, due to the difficult financial situation in the “Creative”. The court granted the bank’s request.

The Agroindustrial Creative Group is an integrated company specializing in the processing of agricultural products, production of feed products for livestock and poultry, food and biofuel production. The company has 9 factories, crop farms and livestock complex.

China has launched the world’s first 6G satellite into orbit

According to the BBC, China has launched the world’s first 6G test satellite into space. It should demonstrate how well the experimental technology of the sixth generation network works. The satellite successfully entered orbit along with 12 other spacecraft after launching a rocket from the Taiyuan Cosmodrome in Shanxi Province. It is known that the […]

Why “to speak about itself”  is so important for any business? In the conditions of the competitive struggle for money of the buyer bright, attractive advertizing is the integral attribute of successful business strategy. What is the main secret  how to make the prospective client purchase what you are  offered to buy for him ? […]

The defining reason for the depreciation of the hryvnia against the dollar and the euro in the third quarter was the deterioration of business expectations. Deteriorating expectations created increased demand for the currency, which turned out to be higher than supply. This contributed to the devaluation pressure in the foreign exchange market in the III […]

On Friday, Buffett’s Berkshire Hathaway announced that it has lost $2 billion on its IBM investment. That’s 15% of the more than $13 billion worth of IBM’s stock that Berkshire has purchased over the past four-plus years. Berkshire says it is still committed to IBM, calling the downturn in IBM’s stock “temporary.” “IBM continues to […]