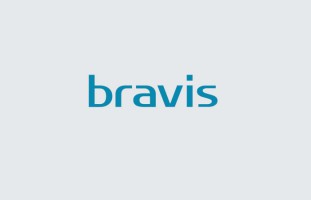 The network “Foxtrot” noted that the logo of the Bravis trademark must match the level of the top brands in consumer electronics, for increased demand among consumers. Such  decision was taken to increase the competitiveness of domestic producers of electronics.

In such a way the company decided to make changes and update the Bravis brand, which produces audio-video equipment, digital devices and accessories. The new logo of Bravis is more modern, easy, concise and friendly (user-friendly).

The basis for creating a new logo of Bravis served the main trends of the perception of the sign by the audience. Among them maximum simplicity, providing easy reading; rhythm, supports writing lower case letters; Neutral colors (gray-black-white) or “metallic” colors (blue, dark blue, steel). Bravis SEA became the new corporate logo colors, but if necessary, it is allowed to use such colors and logos: Bravis WHITE, Bravis BLACK.

For 10 years in Ukrainian market TM Bravis has proved itself to be the top player of the market in an affordable price segment. So, Bravis TVs ranks first in the number of televisions sold by the “Foxtrot” network and is in the top three leaders in the number of televisions sold in bulk in Ukraine, according to GFK. Among recent achievements of Bravis should be also included getting 1 ranking national award among manufacturers and retailers “Private Label-2015″ in the category “The dynamics of the STM development”, that confirmed by the emergence of a number of new products in the assortment of producer in 2015: tablets-transformers, fitness bracelets, power-bank.

The Bravis product portfolio is continually evolving. And the new logo is intended to support a modern and high-tech brand image, – said Sergey Teslenko, the head of own brands network “Foxtrot”.

Tesla plans to sell shares totaling up to $ 5 billion

Tesla has agreed with a number of banks to cooperate in the sale of shares in the company totaling up to $ 5 billion, according to the US corporation. “We have entered into a share distribution agreement … under which we may from time to time offer and sell our ordinary shares with a total […]

Chinese Internet company Alibaba and electronics manufacturer Xiaomi will be included in stock exchange index Hang Seng Index from September 7, said the operator’s Hang Seng Indexes. Earlier, the operator announced the results of the review of indexes for the quarter ended June 30. Along with Alibaba and Xiaomi, the index will also include WuXi […]

The Russian office of the Swedish cosmetics company Oriflame suffered a series of cyberattacks, after which passport scans of 1.3 million Russian customers entered the network. The publication reports that as a result, passport data were put up for sale on the hacking forum RaidForums. “Passport scans of not only Russians, but also clients of […]