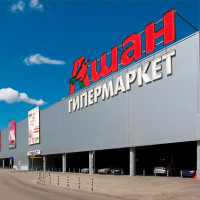 The “Auchan” network won a lawsuit against the Antimonopoly Committee of Ukraine in the case of cartel retailers.

In April 2015 the Antimonopoly Committee of Ukraine made a decision on the most massive and scandalous case in the food retail market – the cartel of 14 retailers, which, according to the AMC, has led to a cost increase of food by one third in 2010-2011. It was about retailers operating under the brands of “Silpo”, “Fora”, “Furshet,” “Velyka Kyshenya”, “Eco market”, “Caravan”, “Billa”, “Novus”, “Spar”, “Bimarket” and “Metro”. The total amount of imposing fines amounted to 203,616 million UAH.

After the decision, all retailers sad that they intend to challenge in court imposed fines.

And only “Auchan Ukraine” won  the case in the Antimonopoly Committee.

“With respect to the remaining participants in the case ? 242-26.13 / 150-12 AMCU filed suit in the Commercial Court of Kyiv, Kyiv region, Zaporizhia and Dnipropetrivsk regions. The courts were won  in respect of legal persons, who have ceased their activities, such as the company “Krai 2”, LLC, “Adventis”, LLC, “Spar-Center”, LLC. “X 5 Retail Group Ukraine”, OJSC won the Court.

It will be recalled that, the AMCU investigated the case against the 14 largest retailers such as ATB, Silpo, Auchan, Great  Kyshenya, METRO, Billa and others more than three years. In spring 2012 the AMCU has established that the network inflated food prices during 2010-2011. According to the Committee, during this period prices increased by 22-38%, while the consumer price index over the same period – by 13.5%. Retailers  coordinated  their activities with the help of market research firm AC Nielsen, believe in the AMC.

Research Company conducted monitoring of food prices on the shelves, and transmitted this information to competitors, allowing all players to coordinate their actions. In turn, retailers refuted the information committee.

The American producer of vegetable meat products Impossible Foods expects that investors will estimate it at $ 10 billion during the listing. The company plans to go public this year, but has not yet decided how to become a public company, reports Reuters, citing knowledgeable interlocutors. According to them, the company is now exploring the […]