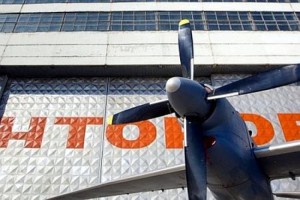 Law №4809 “On Amendments to Certain Legislative Acts of Ukraine regarding the establishment of conditions for international cooperation entities of aircraft and the development of domestic aircraft” supported 241 MP of the Verkhovna Rada, on the evening session on Thursday.

According to the law, the founders and / or members of the joint venture can be a foreign business entities, except those which are located or operate in the country, which recognized by the Verkhovna Rada as the country-aggressor or occupant country and / or country in respect of which sanctions are applied.

The law provides for an extension of the state financial support in the field of sales of aircraft of domestic production through the mechanism cheaper loans (partial compensation of interest rates) up to 2025.

Adoption of the law, according to officials, will allow up to 2020 to bring the industry about 5-10 billion hryvnia investments and enable aviation industry to increase sales of their products by 20-25%.Currently, the leading Ukrainian developer and manufacturer of aircraft “Antonov” (Kiev), a member of the state concern “Ukroboronprom” since 2015, fulfills joint production plans with foreign partners, including multi-purpose transport AN-132, as well as a new generation of aircraft An- 148/158/178.

The State Enterprise “Antonov” – Ukrainian company producing series aircraft “AN”. Was founded as an experimental design bureau at the Novosibirsk aircraft plant led by Oleg Antonov, since 1952 based in Kiev. The most famous models of aircraft – aircraft An-2, passenger aircraft An-24, a large cargo plane AN-124 (“Ruslan”), the largest airplane in the world AN-225 (“Mriya”).

State Concern “Ukroboronprom” – the largest Ukrainian State Concern, which includes 95% of the enterprises of the military-industrial complex of Ukraine.

Included in the list of enterprises of strategic importance to the economy and security of Ukraine.

Read more: Antonov and Taqnia signed an agreement on the construction of aircrafts in Saudi Arabia

The Danish company will combine its assets in Ukraine and Russia. It is reported by “ProAgro”. Antimonopoly Committee of Ukraine (AMC) gave the permission for the merger of Ukraine-Agro A / S and the Russian Pig Meat A / S (both – Holstebro, the Kingdom of Denmark). According to the resolution of the Antimonopoly Committee, […]

Ukraine is preparing an order for An-74 aircraft