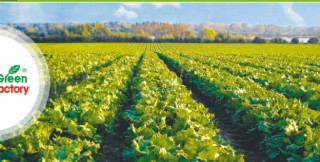 h company Green Factory is interested in renting 500 hectares for growing vegetables in the Zakarpatsky region. The company plans to create its own raw material base in Ukraine.

This is said in the statement of the Zakarpatsky regional administration.

“The Representatives of the Polish company Green Factory Holding,  Rytel Arthur and Martin Kusmerovsky met with the head of the region Gennady Moskal on  March 10, to discuss the possibility of establishing the production and jobs in the Zakarpatsky region”, – stated in it.

According to the representative of the Green Factory Holding , Arthur Rytelya, the company plans to create its own raw material base in Ukraine and, except for the sale of the products in the Ukrainian market, to export them to Poland, Romania and Slovakia.

“Therefore, we are interested in renting a minimum of five hundred hectares of farmland in the Zakarpatsky region “, – he said.

The company is also interested in finding skilled workers and is ready to organize the training for the150 local residents in Poland, followed by employment in the region.

Moskal, in his turn instructed the heads of the main department of the State Service of Geodesy and Cadastre Department of Agricultural Development and the regional administration jointly with the Green Factory to find a suitable farmland.

Previously it comes to lease 100 hectares of land of the state property in Khust district.

Near there are situated  the lands of the shareholders, that employers agree to hire, thus extending the total land area of ​​500 hectares.

The Green Factory specializes in the production, transportation and distribution of fresh vegetables, as well as cut, ready-to-eat leafy salads.

The company’s customers include the largest retail chains in Poland, as well as, in particular, McDonald’s.

As previously reported, Poland is ready to help Ukraine in the issue of reform in agriculture.

Gazprom has delivered a record amount of gas to Turkey

In 2021, Russia’s Gazprom supplied 20.3 billion cubic meters of gas to Turkey, which is the maximum figure in less than nine months. This was reported by the company’s press service following a meeting of its chairman Alexei Miller with Turkish Minister of Energy and Natural Resources Fatih Donmez on Monday, September 20. At the […]

Due to the elimination of corruption patterns in the energy sector, the State Treasury has saved 140 billion UAH. On this figure notified the head of the government of Ukraine Volodymyr Hroisman in an interview to the national news agency Ukrinform. According to the Prime Minister the compensations for Naftohaz and LMKP Teplokommunenergo were hundreds […]