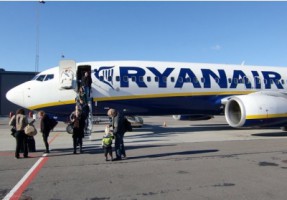 Sources say that the air carrier is considering the Ukraine as an addition to its major markets.

The largest European low-cost airlines Ryanair sizes up the Ukrainian market of air transportation, in particular, the discussions with Lviv are underway.

This was announced in an interview to the forbes.net.ua by the Commercial Director of the airlines, David O’Brien.

“We are in dialogue with the people from Lviv, but do not think that we will be discussing the flights to Odessa.  Today Ukraine can only be seen as an addition to our main markets”, – O’Brien said.

According to him, these markets are Italy, Spain, UK, Ireland, Germany, where many popular destinations are much closer than Ukraine is.

“Broadly speaking, our business model is that each additional flight increases our costs, calculated per passenger, that’s why  we expect the return of the investment.  Now in Ukraine, of course, there is the demand for flights to many countries. But most of all are flights to the East and North, where Ryanair has no legal rights to fly, and even physically is unable to carry out these flyings”, – said the commercial director of Ryanair.

On August 2015 Director of Communications of Ryanair, Robin Kylie said that the decision to approach low-cost airline to Ukraine depends on the implementation of the agreement on a common Aviation Area with the EU.

The Australian company got rid of the gas field in Ukraine

Shares of large American technology companies – Microsoft, AMD, Visa, Tesla, Netflix and Facebook – have been admitted to trading on the Ukrainian stock exchange PFTS. This was reported by the press service of the exchange. According to the results of April 15, the quotations (best bid) of the mentioned shares are as follows: Microsoft […]

Rating of the best countries for business: what has Ukraine achieved?

For the year Ukraine dropped 13 points lower in the world ranking by business publication Forbes «Best Countries for Business”: from 61 to 74 place. According to the research, which included the analysis of the basic conditions for doing business in different countries of the world, since the beginning of 2016 Ukraine’s index dropped significantly. […]