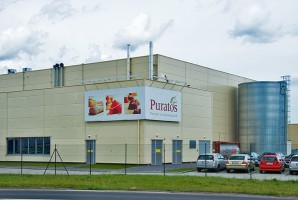 The international manufacturer of goods  and raw materials in the bakery, patisserie and chocolate sectors Puratos built a plant in Odessa region.

“Puratos will launch its own production of ingredients for the baking and confectionery industry in the Odessa region “, – said in the statement. The business of the company focused on meeting the needs of B2B sector (industrial manufacturers, retailers and the HoReCa sector).

The company announced its  intention to build a plant in the Odessa region last summer. This was written by the head of the department of foreign trade and European integration of the Odessa regional administration – Eugeniy Wolyniec on his page in Facebook. In July 2015 the representatives of the State Administration and the “Puratos Ukraine”, the subsidiary company of Puratos,  held a meeting on the preparation of the investment project of the plant.

The “Puratos Ukraine” company plans to invest 7 million euros in the production. Works start in September 2015. The plant will be equipped with the latest equipment and technologies, which corresponds to the concept of environmentally friendly economy. Eugeniy  Wolyniec wrote that it is planned to export up to 40% of the plant production”.

Puratos is an international group of companies specializing in the production of goods and raw materials in the bakery, patisserie and chocolate sectors. The headquarter of the company is situated  in Belgium.

Today the Puratos products are represented in more than 120 countries around the world.  The company opened an office in Ukraine in 2005, in Odessa. In 2007, the company has commissioned a factory for the production of confectionery fats  and specialized margarines under the TM Puratos for industrial use, and in 2010 it began producing dry cake mixes in Ukraine.

During the first phase of the implementation of technical specifications for the development of the transport infrastructure in the Yuzhnyi port, the Allseeds company packed 6 points and 900 m of the electrified tracks, established  3 shunting winches, performing works totaling for more than 25 mln. UAH, – says  the press -service of the company. […]

Leaders of Yahoo have told  that they refused from the realizing  of the business to China’s Alibaba in the amount  of $ 30 billion. The Company  also thinks what they have to do with the Japanese peace of the business, which is estimated at     $ 8.5 billion. (In the Japanese company they owns […]

The agricultural enterprise “Danosha” (Kalushskyi  district) intends to build a station for the biogas production in the village Tustan Galichskyi district, Ivano-Frankivsk region till 2017. It was said by the CEO Christian Jacobsen to the reporters. The plant capacity is 1 megawatt. It will use the raw materials of organic waste of animals and herbage. The installation […]