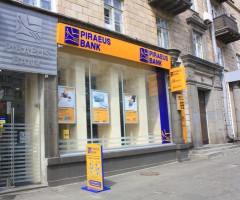 Kyiv bank “Piraeus Bank ICB” asks the Commercial Court of Kirovograd region to recover from the “Creative”company, which entering into the “Creative Group”, $ 15,629,000 of the loan debt,  – reports the “ProAgro”.

This is stated in the bench ruling of the court from January 27, 2016.

The Agroindustrial “Creative Group” is  an integrated company specializing in the processing of agricultural products, production of feed products for livestock and poultry, food and biofuel production. The company has 9 factories, crop farms and livestock complex.

“Creative Group” is in the TOP-3 of Ukrainian processors of sunflower seeds and it is the second largest exporter of sunflower oil in the Ukrainian market.

The “Piraeus Bank” in Ukraine is a part of the international banking Piraeus Bank Group. Its main office is situated in Athens, Greece. The company is counting more than 22 thousand employees in 10 countries where the Piraeus Bank Group offers a full range of financial services and services to  7 million customers. Total assets of the Group amounted to EUR 88.5 billion, credit portfolio is 58.7 billion euros, while customer deposits reached € 54.4 billion (as at 30 June 2014).

Naftogaz agreed with the Poles on the development of subsoil

Naftogaz of Ukraine signed a memorandum with the Polish PGNiG on joint development of fields in the western regions of Ukraine. This was reported by the press service of the NAC on Tuesday, March 30. Naftogaz CEO Otto Waterlander said the company had acquired strategic assets “that enable it to confidently declare the greatest hydrocarbon […]

Kiev plans to build the airport for the drones

Kyiv intends to build the airfield for unmanned aerial vehicles in five years. This was stated by the head of the All-Ukrainian Federation of Drone Owners Taras Troiak, said in the message from the National League of Transport Business on the Facebook. “We have the Quadroport project that we want to implement in Kyiv. It […]

One of the most famous car companies will get a multi-million fine for concealment of information in the financial statements for regulators. The supervisory authorities in the US announced that they intend to impose a fine on US-Italian concern Fiat Chrysler in the amount of $ 70 million for a significant underestimation of the number […]

The American corporation Apple is threatened with a drop in profits from smartphone sales by 25-30% if the company removes the WeChat application from the App Store worldwide. This statement was made by a well-known expert on the gadget market Ming-Chi Kuo. According to his forecasts, the WeChat application is used by users in China […]

In March this year, the United States imported oil and petroleum products from Iran totaling 1.03 million barrels. This is evidenced by data from the US Department of Energy’s Energy Information Administration (EIA). This delivery was the second since 1991, when the United States stopped importing Iranian oil. According to the EIA, another supply of […]