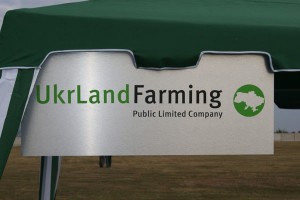 Seeing a clear plan of debt restructuring, international lenders agreed to continue cooperation with UkrLandFarming in the agricultural sector.

“Today we can see that efficiency UkrLandFarming fully restored, the financial situation is stable, and the lenders are configured to work with the holding in the future”, – said Nick Piazza, CEO of SP Advisors finance company.

According to him, the agricultural sector will be one of the most attractive destinations for investors in the next few years. “Right now, investor interest is concentrated on traditional industries of Ukraine – on agriculture sector and on the food industry”, – said the expert. Nick Piazza said the company Ukrlandfarming, which is owned by Oleg Bakhmatyuk already negotiates with creditors about finance the construction of grain processing terminal at the port of “Yuzhnij”, at the Black Sea.

“I think that the grain terminal in the port of “Yuzhnij “is a unique opportunity as for Ukrlandfarming, and for Ukraine. This ambitious project has been planned by the company for over a year. Money for investment in the capital of this project has already been found, and the Ukrlandfarming is negotiating about the conditions with debt investors “, – said a financial analyst.

Opportunities for new borrowing, in the international market, for UkrLandFarming, have been opened after successful negotiations with creditors to restructure debt.

“Bakhmatyuk was not lost sight of, and showed really constructive dialogue with creditors. This position looks for investors is very positive. Debt window currently remains closed to all Ukrainian companies. But as soon as this window will be open, I see no reasons why UkrLandFarming can not re-enter the debt market, for example, for the refinancing of its current debt, “- concluded the expert.

The company of Oleg Bakhmatyuk, UkrLandFarming already preparing to begin construction of grain processing terminal this year in the port “Yuzhnij”. The design capacity of grain processing complex will be 10 million tons. The company will build three berths 600 meters long, which will be able to handle ships carrying up to 100 thousand tons. The capacity for simultaneous storage of grain at the terminal will be 800 thousand tons. It will also build a container terminal, feed mill and the oil-fat complex with capacity of 260 thousand tons. Financing of the project is estimated at $ 400 million.

Ukrlandfarming Group is the largest in Ukraine vertically integrated agricultural holding, which controls the largest area of the fertile black earth in Ukraine – 653 thousand hectares.

Read more: Ukraine has canceled the registration of foreign investments

French media group Publicis will invest in 90 StartUps, including from Ukraine

Media Group will provide from 10 000 euros to 500 000 euros, depending on the stage of development of the project.  One of the world’s largest media group Publicis decided originally to commemorate the 90th anniversary: ​​ to finance 90 StartUps from around the world, including Ukraine, – writes AIN. As the newspaper writes, the […]