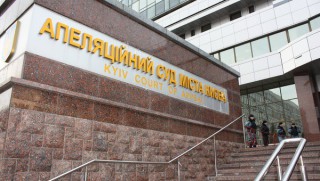 The judicial panel on criminal cases of the Kiev Court of Appeal March 16, 2016 considered and settled  the appeal, canceling the seizure of property of  the GREENSTONE group of companies: “Petroprodukt-Ukraine”, “Yagotynske HPP”, “Protein-Production” and “League “. This was said in the press release.

At the request of the investigator of the National Police – Burtovoy, February 4, 2016 was seized the property of the enterprises of the group companies, after which an appeal was made .

“March 16, 2016, the judges, having considered the appeal, found that: “based on the application, there are no sufficient evidences  of the commission of criminal offenses involving  the companies  “Petroprodukt-Ukraine” “Yagotynske HPP”, “Protein-Production” and “The League” – said in a press release.

It is reported that in the course of judicial review was also indicated the fact that the decision that has been appealed, was issued on February 4, 2016, while according to the hearings book the consideration of the petition was held in January  4, 2016, and that is virtually impossible. That means, that the conclusions of the deputy chief of the department of crime investigation in the official activities of the Main Investigation Department of the National Police Department in Kiev and the investigating judge in this regard are erroneous.

“In this case we have a violation of Art. 171 CPC of Ukraine, since, firstly, a civil servant of the National Police has not provided sufficient evidence to arrest the property, and secondly, the previous decision of the investigating judge has violated the fair balance between the guaranteed by the law  interests of the property owners and the task of the criminal production. We believe that all the cases should be considered only within the framework of the Ukrainian legislation”, – said the chief legal adviser of the GREENSTONE Group –  Elena Bosonchenko.

Almost 100% of the shares (99.83%) of Kherson heat and power plant will be re-auctioned by the State Property Fund of Ukraine. According to preliminary data it will be held on March, 16 of this year on sale with a starting price of 155 million UAH. It is reported by the source Sehodnia.ua. Terms of […]

2017 was marked by many interesting and significant events for Switzerland. They relate to science, culture, and the social life of the country, and have become important and notable for both Switzerland and for Ukraine. 1. We celebrate the 25th anniversary of the establishment of Ukraine-Switzerland diplomatic relations in 2017. Both sides undoubtedly appreciate well-established […]