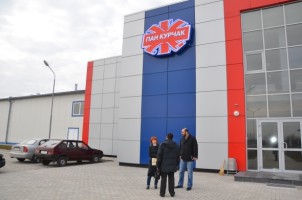 The “Pan Kurchak” agroindustrial group  got permission to export chicken to the EU. This is the third Ukrainian company, besides the MHP and “Agromars” Complex” that can ship products to Europe.

Products designed for the European market will be produced at the facilities of “Gubin” poultry complex”, which were upgraded in 2015.

“The advantage with the organization of supplies in the EU is a prime location of slaughter capacity of “Gubin” poultry complex” – only 15 km from the Ukrainian-Polish border. This will allow to supply not only frozen, but also refrigerated goods”, – said in a statement.

As reported Delo.UA, the  “Pan Kurchak” agroindustrial group opened 10 poultry houses with a single planting of 0.5 million birds in the village Holopichi (Volyn region) in  summer 2015.

According to the Chairman of the Supervisory Board Sergei Gorlatch, additional production site allowed “Gubin” poultry complex”, Ltd., which is a part of the group, to carry out a single simultaneous seating of 1.85 million heads of poultry, which is 35% more than before they started.

The “Pan Kurchak” agroindustrial group was founded in 2001. It is engaged in the cultivation of crops, production and sale of animal feed, breeding broilers and pigs, meat processing.

The “Gubin” poultry complex” Ltd. is the largest division of the group. Five poultry farms, with an annual capacity of more than 8.2 million heads, in Volyn region are located in the complex after the launch of the new poultry houses.