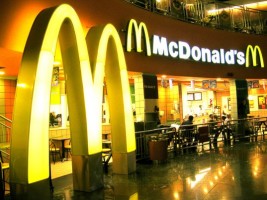 The chain of one of the world’s most popular fast food restaurants McDonald’s is suspected in violating tax laws in Europe.

The investigation is scheduled to consider McDonald’s violation of European legislation. The company allegedly was trying to circumvent the law by moving profits in corporate offices and to pay the least tax.

A spokesman for the European Commission Ricardo Cardoso declined to comment on the situation.

McDonald’s representatives said that have not yet received any formal charges and expressed confidence in the fact that any investigation would be resolved favorably.

“McDonald’s operations in line with European tax law, the company pays a large amount of corporate income tax. As a fact, from 2010 to 2014 the amount of income tax paid by the McDonald’s company  in the European Union amounted to more than $ 2.1 billion. In addition, the property tax, social taxes, and others are paid.” – McDonald’s says in their message.

Tax activity of the McDonald’s company  has long aroused the suspicions of NGOs.For example, well-known figures of the London War or Want accused the popular fast-food chain that they did not pay in full to the European treasury $ 1 billion between 2009 and 2013. On its website the organization “shamed” McDonald’s for such an attitude to the European tax and the laws, and urged regulators to address the issue of the investigation of this case.

The officials  of the mobile operator “Kyivstar”  deliberately evaded of the payment of taxes in the amount of over 2.3 billion UAH  by the fictitious business operations in 2014, testify the conclusions of the inspection. This is stated in the message of the management of public relations and mass media to the General Prosecutor of […]

Kharkiv plant Electrovazhmash will soon receive a certificate and will participate in tenders of Ukrzaliznytsia for the renewal of rolling stock. This was announced on Thursday, March 25, the State Property Fund. Representatives of the companies discussed further cooperation within the framework of the previously signed road map. The Minister of Infrastructure Vladislav Krykliy and […]

Moderna vaccine will be tested on teenagers

The mRNA-1273 vaccine from the American company Moderna will be tested on three thousand children in six US states. CNN reported this on Wednesday, December 2. “Moderna has started inviting children over the age of 12 to try the vaccine” the statement said. It is noted that the study will involve volunteers aged 12-18 from […]