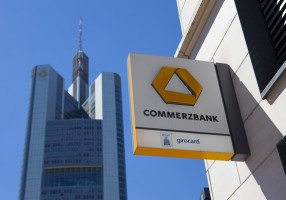 Failure by banks of their obligations under the agreement is a part of the reason for the lawsuits, the amount of which is sometimes measured in billions of dollars, it depends on the losses.

One of the largest financial institutions in Germany  Commerzbank, requires four US banks for damages in the amount of $ 2 billion dollars judicially. The plaintiff appealed to the District Court of New York, demanding to punish US banks for improper fulfillment of obligations.

Defendants in the case are:  Deutsche Bank National Trust (US subsidiary), Bank of New York Mellon Corp, Wells Fargo, and HSBC Bank USA. The court session will be held in the District Court for the Southern District of New York.

The Commerzbank lawsuit stated on improper performance of the liabilities of banks in transactions. Namely, the calculation of potential risks was not counted; that could prevent the rapid decline in assets.

Commerzbank acquired the securities of banks, which were secured by mortgage assets. All funds were  devalued and have been lost, and Commerzbank believes that the damage has been incurred to them due to the negligence of financial institutions with which it has concluded agreements.

The bank  estimates its losses in such a way:  as a result of cooperation with the US banks in the total amount has been lost about $ 2 billion  that Commerzbank is now trying to return  through the court.

Commerzbank is one of the oldest banks in Germany, which was founded in 1870 by the merger of several private banks. The number of its employees has about 56,221 people. The bank’s profit in the first half of 2015 totaled € 646 million, that is 2.15 times more than the same period last year.

Regulators fined the largest French mobile operator – The Orange Company in the amount of € 350 million. The reason for the fine is the abuse of a dominant market position. The supervisory authorities of France conducted an investigation and determined that since the early 2000, Orange fraudulently suppressed the competition in their field. The […]

NBU gives the permission of Com in Bank purchase

NBU gave the permission on 100% of shares purchasing of Com in Bank to the foreign investors. The representatives of National bank of Ukraine made the official statement. According to the source, Stefan Pinter, the chairman of GML Capital Fund, submitted the application for implementation of the transaction about the  financial organisation assets acquisition two […]

The famous Italian fashion house Prada has decided to make adjustments  of the management of its business  because of the fact that the company’s sales began to fall. General Director of Prada Patrizio Bertelli  is going to re-equip production and hold a business restructuring. At the end of 2013 the company’s revenues declined, while management […]