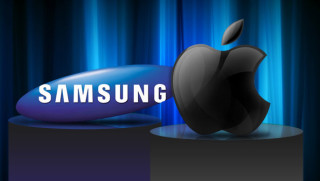 Recently resolved a long legal battle between the two eternal rivals -Samsung Electronics Co. and Apple Inc. December 4, 2015  in the US District Court in San Jose, California, Samsung representatives said that they will pay Apple compensation in the amount of $548 million in the case of patent rights. This amount today suits both sides. This week Samsung will receive the necessary details for payment.

Representatives of Samsung Electronics made a reservation that they are paid the named sum, but they remain confident that their products do not infringe the patent rights of Apple. Samsung also added that they would do everything necessary to protect their products, and will be watching after Apple and their actions.

The battle between two companies began almost five years ago, in 2011, when Apple filed a suit for Samsung because Korean manufacturers have completely copied the exterior design of the iPhone; it can be seen in the released flagship Galaxy S. Then the decision was made in favor of Apple, Samsung had to pay Apple $1.05 billion. Samsung was not agree with this outcome and appealed. During many lawsuits and scandals companies have created a large number of internet memes, the theme of which was that these brands are copying each other. Finally, after lengthy court proceedings the amount that had to pay the Samsung Company has been reduced to $548 mln.

Though at present the parties come to a common agreement anyway well-known people say that this confrontation between two companies is not completed. The Samsung still have time until December, 14 for appealing to the Supreme Court. Also, analysts argue that Apple did not calm down, and may subsequently require a court to increase the amount of damage.

German airline Deutsche Lufthansa AG on Monday took the third package of measures restructuring of business because of poor dynamic aviation market recovery, according to a press release. “Forecasts for international flights have deteriorated significantly in recent weeks. With the end of the summer holiday season, the number of passengers and bookings is declining again […]

Amazon starts to open new offices in six US cities

The US company Amazon will expand its business in six cities of U S, investing more than $ 1.4 billion in this activity. This is stated in a statement published on the website of the corporation on Tuesday, August 18. “Today, we are pleased to announce the plans which provide for continued investment and the […]

Hypermarket chain Karavan may go under the leadership of the french sub domestic corporation Auchan. This information was confirmed by a source in the Ukrainian network Auchan, several members of its advisory on commercial real estate, and also the authorized representatives of companies that are working with a network of hypermarkets Karavan. The final deal […]