Unfortunately, most businesses in our country learn about foreign investments from the media but not directly from their own production facilities. Despite the recent positive changes in
the state, we still can’t talk about a high or at least a satisfactory level of foreign direct investment in the Ukrainian economy.

According to analysts, this year’s foreign direct investment (FDI) in Ukrainian business will be at the level of 2017 and will be up to $2 billion. As for the desired or required annual amount of direct foreign investment in the country’s economy, the assessment varies from $5 billion to $20. For example, the State Agency for Energy Efficiency presented about 100 alternative energy
projects requiring 3.4 billion EUR. Thus, the forecasted $2 billion of this year’s investment is a drop in the ocean for the country’s economy.

According to the State Statistics Service, foreign investors brought $519.2 million into the Ukrainian economy in the first quarter of 2018. That includes $449.8 million from the EU countries and $69.4 million from other countries. As of April 1, 2018, the capital of non-residents in Ukraine amounted to $32750.8 million. Investors from the EU hold $25199.7 million, investors from other countries — $7551.1 million.

The funds were directed primarily to the industry — it received $10992.4 million, real estate transactions got $10213.3 million, trade and car repair sphere received $3879.8 million.

Direct investment by the principle of directivity (flows to Ukraine), billion USD 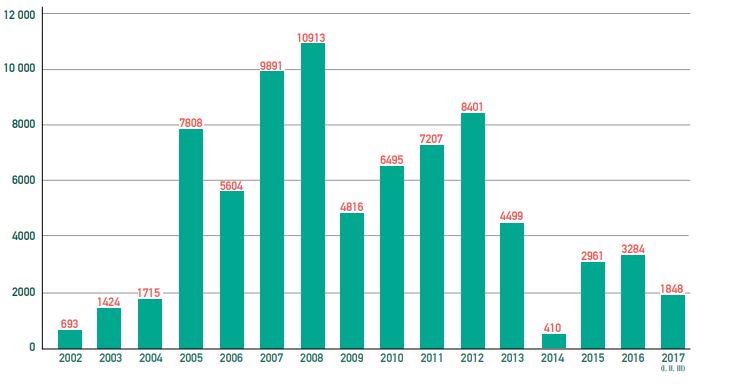 The names of investor countries should not be misleading since it’s about the so-called “round-tripping” investment in many cases. This is a phenomenon of returning resident’s withdrawals abroad under a disguise of direct foreign investment.

For the past seven years, direct foreign investment, when a resident of Ukraine was the ultimate controlling investor, came from Austria, the Netherlands, Switzerland and
Cyprus which gave half of these investments. According to the National Bank, their total amount is $7.9 billion, which is 22 % of the total FDI inflow. We should also emphasize that 80 % of these funds were directed to manufacturing enterprises.

The dynamics of revenues for this period is characterized by a curve. Investment volumes grew in 2010-2013. There was a net outflow of such funds in 2014-2015. In 2016-2017, a positive dynamics started developing and they became of 6.9 % of the total investment inflow to the country. Such funds appeared to be 10.4 % of all foreign direct investment and amounted to $270 million last year.

According to the State Statistics Service, capital investment (CI) in the country increased by 37.4 % in 2018 compared to the same period in 2017. Business received 89 billion UAH of CI in the first quarter of 2018. If we analyze that by industry, the largest growth of such investment is observed in telecommunication, financial and insurance spheres, transport, postal and courier
spheres. There is a downturn in the area of administrative and auxiliary services, as well as in construction.

Almost half of capital investment — 49.3 % — was spent on machinery, equipment and vehicles. 38.2 % was spent on buildings and structures. 5 billion UAH were spent on major repairs.

The source of capital investment is mainly own funds of enterprises and organizations. They became around 76 % of the total investment this year.

According to the results of the first quarter of 2018, compared to the same period in 2017, the Donetsk region became the leader of capital investment among all other regions – investment from there have grown by 2.3 times. Then go the Chernihiv region with x2 growth, Zhytomyr with 64.6 %, and Kyiv with 61.1 %. Capital investment declined the most — to 23.9 % — in the Luhansk region.

PJSC ArcelorMittal Kryvyi Rih is among companies that have been investing a lot recently. Shareholders decided to direct their profits to the production development. The company received $2.289 billion from the product sales last year. The volume of capital and operating investments amounted to $338 million. The net profit was $190 million. ArcelorMittal plans to upgrade the production lines worth $404 million in 2018. The total investment in the production development is planned to be $1.5 billion by 2022. Note that the company employs 33 thousand people
who timely receive salaries around 12000 UAH per month, as well as the 13-th salary. Since May 1, 2018, salaries were increased by 5 % for administrative staff and by 20 % for production staff.

American Coca-Cola has invested $0.5 billion over 25 years of its activity in Ukraine. In 2012, the country’s first quad-generator plant was built. It provides the company with electric power, hot water, and carbon dioxide. 18 million EUR was invested in the construction. CocaCola orders goods and services from 1400 Ukrainian companies, what covers 72 % of the company’s needs.
Therefore, each job in the company generates 17 more jobs. Recall that the company employs 1,600 people.

Swiss company Nestle S.A. started its activities in Ukraine in 1994 when it was a small enterprise with 50 employees. Nowadays, there are more than 5 thousand workers. Svitoch, which controlling stake belongs to the Swiss company, launched a new line in 2017. Volynholding, fully owned by Nestle S.A., has put into operation one of Europe’s largest storage facilities for raw materials and finished products. The company decided to invest 700 million UAH into the Kharkiv factory “Technocom” in April, 2018. They plan to completely modernize it by 2021.

A transnational company Bunge is also among enterprises that have made significant capital investments. You may be familiar with it thanks to the trademarks Oleina and Rosumnytsa. This company has invested $500 million since 2002 when it came to Ukraine. Significant funds were directed at the construction of a grain terminal in the Mykolayiv port and the construction of oilseeds processing enterprises on its territory. In 2018, the company will make another investment of $30 million to increase the capacity of the reloading complex in the Mykolayiv port.

What is there for the agrarian sector? Though investment shows us the growth dynamics, they remain insufficient. 890 million UAH were invested in crop and livestock production in the first quarter of this year. This is just 1 % of the overall capital investment structure. 202 million UAH were invested in the land, it is about 0.2 % of CI. The total volume of capital investment in the first three months of 2018 amounted to almost UAH 9 billion.

We can proudly state that Ukraine also invests in the economies of other countries. The total volume of foreign direct investment was $6325.1 million at the beginning of April 2018. Our country has invested $6077.6 million in the EU, and $247.5 million — to other countries.

FDI from Ukraine amounted to $0.7 million in the first quarter of 2018.