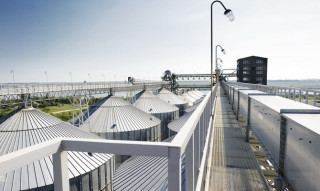 The Turkish company Molino intends to build a modern grain terminal in Odessa with a fast speed of stowing a ship.

During the investment forum “Prospects of development of sea trading ports of Ukraine” in Odessa the Turkish company Molino offered investors to construct modern grain transfer complex with a fast speed of stowing a ship.

“The main problem of Ukrainian ports is outdated equipment. The  production processes are slow, time losses.  Many of transport companies don’t  want to work in Ukraine, they don’t want  to waste their time”, – said the vice-president of the Molino company,  Salim Alabeyi.

He proposed the building project of a grain terminal with the ability of simultaneous loading of two ships of the Panamax class and receiving (upload) of the grain from trucks, rail cars and marine boats (in the case of imports).

“The equipment allows to upload both dry-cargo ships with an intensity of 1.2 tonnes per hour, that is, in general  – 2.4 tons per hour. It is easy to calculate that the Panamax can be loaded in one day, whereas today, such ships sometimes stand in Ukraine for a week. The rate of unloading of trucks and cars is 200 tons per hour, ships  – 600 tons per hour”, – said the representative of the Turkish company.

According to him, the project is proposed to Odessa, but can be implemented in any port of Ukraine. The required area for its implementation is  170 thousand sq m, the turnkey project cost is $ 150 million, and, on conviction of the top manager of the Molino, it will be repaid  for four years.

Hundreds of thousands of airline workers could lose their jobs

Musk became the “most expensive” CEO in the United States

The founder of Tesla and SpaceX, Elon Musk, became the highest paid CEO in the United States last year, according to Forbes magazine. The publication reminds that in 2018 Musk gave up his salary at Tesla. Instead, he receives a reward in the form of options on the company’s shares. In 2020, the businessman received […]

Striving for sustainable growth, the Credit Agricole Group implements the Climate Strategy, which is a high-priority and an integral part of the Group’s Medium Term Plan 2022. Credit Agricole Bank fully supports the Group, and under the approved strategy, plans to reduce its direct carbon footprint by 10% during 2018–2022, and become one of TOP […]