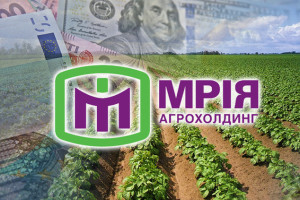 Mriya Agro Holding has received a proposal for the financing of working capital in the amount of $ 50 million to finish the season in 2016, reports the press-service of the company.

According to the report, the Mriya company has received an offer from a consortium of current  bondholders  and from the  international investors about the opening of a new credit line in the amount of $ 50 million.

The new working capital will allow to finish the  spring sowing and to conduct a harvesting campaign. An essential condition for obtaining a loan is a decision of  majority of creditors on the restructuring agreement.

It is noted that the agricultural holding Mriya is now in the process of negotiating with creditors and coordinating committees bondholders  concerning conditions of restructuring the debt portfolio, in which changes necessary for attracting a new credit were made.

The financial director of the Mriya Ton Huls notes that the restructuring process through which Mriya takes a course, is unique in Ukraine, since it provides all the benefits of creditors’ equity participation. Besides, the process involves a large number of stakeholders with different interests, each of which operates as part of their procedure.

“Our current task is to coordinate the acceptance of conditions by the majority of creditors, as well as integrate and consolidate all the individual loan agreements to the new standard loan document that would be acceptable for all parties and consistent with the laws of Cyprus and Ukraine. We hope that we can quickly go through all the necessary legal and administrative procedures “, – he added.

It is also noted that the Mriya urges the creditors to agree the terms of the restructuring and to attract  working capital until the end of March 2016; in this case, an additional working capital of the company will be financed in the end of April.

“During the talks was also agreed to prolong the loan agreement for $ 9 million under the loan to replenish working capital, received by Mriya in June 2015”, – reported the company.

Recently, a federal court  of the USA  has received several class lawsuits where the world’s most popular social networking site Facebook is a defendant. The plaintiffs in the case are large investors of Facebook. The global network Facebook is accused by investors that it  has not notified them of the risks and concerns that relate […]

Johnson & Johnson plans to examine the final vaccine in September

Shares of Johnson & Johnson rose by 0.68% on Thursday, ahead of the growth of the S&P 500 index by 0.32% after as the company announced that it plans to begin the final phase of a clinical trial of its COVID-19 vaccine in September. Shares of J&J recovered after losses in February and March and […]