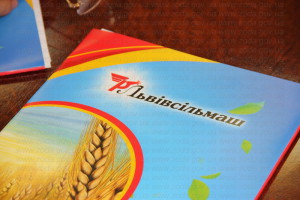 Recently, one of the plants of Lviv, which operates in the agricultural sector, has become bankrupt. This refers to the  agricultural machinery plant “Lvovselmash” that the Commercial Court of Zaporizhia region declared a bankrupt and opened the liquidation procedure.

Last month, in February, the Commercial Court of Zaporizhia region ordered the reopening of the bankruptcy proceedings  of the “Lvovselmash” on the rehabilitation stage in connection with the termination of a settlement agreement regarding outstanding claims of the creditors.

The plant “Lvovselmash” is an  industrial company of the Agricultural Engineering, located in the Railway area of ??the city. In 1945, the Lviv factory of agricultural machines was established on the basis of repair shops in Lviv, in 1946 the plant was fully commissioned.

In June 2013 during the inspection of the plant, prosecutors detected the failure of the management of the plant who didn’t provide a nessesary  storage conditions for the material values of the state mobilization reserves of Ukraine in the amount of 460 thousand UAH, as a result there was abounded a damage to the state, and a fine of 480 thousand to the plant UAH was imposed.

In the last few years the plant has had financial troubles. In 2013, the plant has stopped maintenance of the housing stock, in 2015 sixteen residential buildings of the plant were transferred to municipal ownership.

Uber will launch its service in Ukraine in the near future

The Uber company, specializing in the online service personal drivers, announced that on June 30 presents will launch of its project in Kiev. According to the company’s press service, the visit the Ukrainian capital of European leadership, however, the details of the visit aren’t informed. The mass-media reported that Uber can expand its service to […]

For the first time in a year, business has improved its assessment of economic growth – the NBU

Business assessments of economic growth in Ukraine have improved for the first time since the first quarter of 2020 – the index of business expectations of enterprises returned to a positive value of 108.4%. This is evidenced by the results of a survey of company executives conducted by the National Bank of Ukraine in the […]

The IMF has forecast the growth of the Ukrainian economy

MEDT told how to attract $ 5 billion in investments

Ukraine plans to attract $ 5 billion in investments this year. Deputy Minister of Economic Development Iryna Novikova stated this at the Ukraine 30 business forum. The Ministry of Economy believes that this amount of investment will be able to attract thanks to concessions, support for large investment projects and industrial parks. Thus, Novikova noted […]