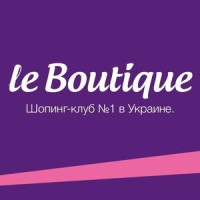 A few days ago the official Facebook-community of one of the Ukraine’s largest shopping clubs LeBoutique was unavailable. The community is quite popular; about 35 000 users signed for the page. As reported in AIN.UA shopping club, the community was blocked by administration of the social network for the use of someone else’s trademark. The retailer has challenged the accusation, but the page is still not unblocked.

“The page was blocked by Facebook. They had suspected violation from our side – the use of someone’s trademark. We have confirmed that the products of this brand are in our range and we are working with the official distributor of the brand in Ukraine. Within a few days, the page should be unblocked “, – said the marketing director of the shopping club Yulia Shilova.

As a rule, for the administration of Facebook drew attention to the violation in any account or record, you need to complain to this violation. Ua.net is full of histories of Ukrainian bloggers, whose accounts were blocked for quite harmless positions due to numerous complaints from the so-called “kremlebotov.”

LeBoutique has no any suggestions, who could complain to the community, either competitors or disgruntled customers. “We do not know. Facebook does not inform us about this, unfortunately, “- commented Shilova.

LeBoutique is the leader in the segment of Ukrainian shopping. The company was founded in 2010, every year the profit of the company is growing and its staff is increasing.

French oil and gas company Total and Google Cloud developed technology based on artificial intelligence to assess the potential use of the solar energy in homes. This is stated in the message of the Total. “Total and Google Cloud pooled their expertise to jointly develop innovative tools of the Solar Mapper, which aims to accelerate […]

Agrotrade extended the cooperation with the EBRD

The “Agrotrade” Company Group renegotiated long-term agreements with the European Bank for Reconstruction and Development (EBRD) for the next 5 years, – said the press service of the company. According to the report, it will be key to the success of the Group companies, to improve the investment climate in the region, economic development and […]