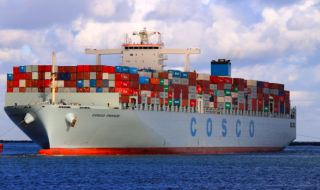 Cosco is the world’s leading container carrier that is the only candidate  to bit for the purchase of 51% stake in the state port of Piraeus in Greece.

The  sale will help to generate hundreds million of euros for Greece, which is experiencing significant financial difficulties ,  therefore is engaged in the sale of  State assets. The Government has adopted the relevant legislation in order to help keep Greece from defaulting.

At the moment, the Chinese company Cosco is the only potential buyer  on bids, according to informed sources.

Representatives of the Greek side of the agreement stated that the Chinese company has long cooperation with the shipping industry in Greece, including the multi-billion dollar loans have been allocated to Greek owners to build ships; the partnership with Cosco always been profitable and that is why they should  buy the state port of Piraeus.

Piraeus is one of the largest ports on the Mediterranean and Cosco  is already using it as a transshipment Center  for Asian exports to Europe.

The deal includes an offer to buy 67.7% stake in the port of Piraeus. 51% of the shares will be transferred to the winning bidder immediately and the remaining 16.7% over the next five years, if it invested by € 300 million on the modernization of the port industry in Greece.

Results of trades will be announced at January 12, 2016. It is known that workers of Piraeus bitterly opposed changing  the form of ownership of the Port;  December 21, they did  not come to work and held a mass strike with calls to cancel the sale.

Cosco is already a Manager of two of the three container berths of the port according to the concession agreement for 35 years for $ 5 billion since 2009. During this time, Piraeus, which was going through a deep crisis, has become one of Europe’s leading transshipment hubs.

The  sale of controlling stake in the port of Piraeus will help Greece  to receive about $ 200 million. Its cost at Stock Exchange of Athens is about $ 390 million.

Ukraine is preparing to place eight-year dollar Eurobonds, Interfax-Ukraine reports, citing a source in banking circles. According to the publication, the Ministry of Finance has already opened a book of applications. The benchmark profitability of the issue is 7-7.25%. The organizers of the placement are BNP Paribas, Deutsche Bank, Goldman Sachs International, JP Morgan.