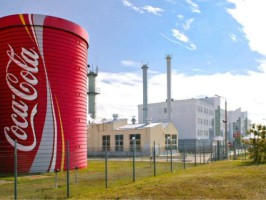 The Antimonopoly Committee of Ukraine ordered the Irish “daughter” of Coca-Cola to refrain from the competing with the “Kvass Beverages” company, which it  sold to the Nova Intertrade Ltd company (Belize) for two years.

“The European Refreshments company undertakes not to exercise, not to have a stake, and not to contribute to competitive activity in Ukraine never during the next two years after the signing of the contract, either directly or indirectly, on their own behalf, on their own or on behalf of any person or persons”, – said in a statement of the antimonopoly authority.

Such obligations of subsidiary of Coca-Cola are concerned with the transaction for the sale of its assets “Kvass Beverages” to the Nova Intertrade Ltd Company (Belize), which the AMCU allowed at the end of April 2016.

“Kvass Beverages” operates in the production and sale of soft drinks (kvass, lemonade) and wort concentrate.

Coca-Cola bought the Zaporizhye factory of soft drinks, which produced kvass under the trade mark  “Yarylo”, in 2009.

According to the database “SPARK-Interfax”, as of November 2012 Nova Intertrade Ltd was the owner of “Strim Torg”, LLC, in September 2012 ” Strim Torg ” was owned by Ivan Neverovsky.

According to the data of the Uniform state register of legal entities and individuals, “Strim Torg”, LLC is engaged in the production of bread and bakery products, food trade, beverages, tobacco products. Its beneficiary is the “Askania Corp.” company (Nevis Island).

According to Delo.ua, the European Bank for Reconstruction and Development (EBRD) represents the credit to Meest Express  of 10 million dollars on post automatic machine network development. The EBRD press-service informed about it.The postal and logistic operator will have  planned  to increase the share on the Ukrainian market and to develop the existent network until […]

Ukraine continues to work on prevention the Russian Nord Stream-2 gas pipeline from operating. The methods by which Kyiv hopes to prevent the launch of the gas pipeline were revealed by the head of Naftogaz Yuriy Vitrenko in an interview with Radio Svoboda. “The battle is lost, but the war is not lost. And our” […]