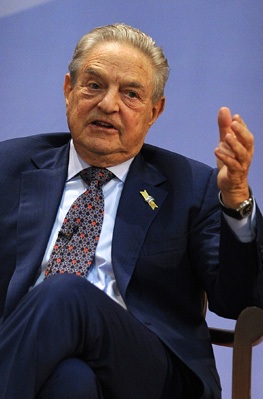 The famous American billionaire George Soros decided to invest to the development of Ukrainian IT-sphere. On the 18th of November 2015, he spoke about buying the part of the Horizon Capital in IT company Ciklum, and a certain amount of assets of Majgaard Holdings Ltd, which is owned by the head of Ciklum Torben Maygaarda. All the necessary arrangements in this regard should be made until the end of 2015

The purchase was initiated by AVentures domestic funds. The main manager of this fund Andrew Kolodyuk said that Soros had a big interest to our IT- service provider at the beginning of the year 2015. Our specialists showed them a great potential and capabilities of Ukrainian IT-sector, so that’s the reason Soros decided to buy shares in the IT-company Ciklum.

What was the price of this question? – no one knows the answer until now, but it is known that he did not buy the whole package of shares, he bought a part of Horizon Capital and the share of assets of the head of Ciklum Torben Maygaarda. Horizon Capital was founded in 2006, and one of the founders of the organization was the current Minister of Finance, Natalia Yaresko.

There are many questions like why did they choose this company to invest in? Firstly, it is one of the largest IT companies in Ukraine, which operates in this area for over 10 years. Secondly, the company has offices in the largest cities of Ukraine such as Kiev, Kharkov, Odessa, Dnipropetrovsk, Lviv and Vinnitsa. Ciklum also operates in countries like the United States, Great Britain, Switzerland, Germany, etc. The company counts more than 2,500 employees.

Belarusian airline Belavia has extended its decision to refuse flights to Ukraine until the end of September, the company’s press service reports. “The Ukrainian side informed about the extension of the ban on Belavia flights until September 30, 2021. This is their official position. In this regard, the suspension of all flights to Ukraine has […]

US International Business Machines Corp. (IBM) slightly increased its net profit in the third quarter of 2020, despite on the declining revenue in the context of the coronavirus pandemic, forcing businesses to delay implementation of projects to preserve capital. According to the press release of the company, Net income in July-September was $ 1.7 billion, […]

“Vinnitsa agro-industrial group” plans to attract financing in the amount of $ 20 million. This was said by the general director of the group, Vladimir Bartz. “We hope to raise $ 20 million. We need them to increase the land bank, to attract more equipment as well as construction of oil extraction plant at the […]

The electronics company LG has completely stopped producing smartphones. The latest gadgets of this brand are Velvet 2 Pro and LG Rollable. These smartphones never hit the free market. And the rest of the models LG sells to its employees working in South Korea. By the way, the only factory that specialized in the manufacture […]