The attractiveness of Ukraine for many foreign investors has been very high and still remains so. However, due to a number of circumstances, the business climate is not yet conducive to the inflow and growth of investment.

The main investors in Ukraine are the Netherlands, Germany, the Russian Federation, Austria, the United Kingdom, the British Virgin Islands, France, Switzerland, and Italy. Over 120 countries are investing in Ukraine in total, although these sums are relatively minor (Tables 1, 2).

We would like to note that Foreign Direct Investment is a long-term investment of material assets by nonresident companies in the country’s economy, which go hand in hand with new technologies and advanced management experience.

In the structure of Ukraine’s trade with the European Union, Germany accounts for almost 20 % (Сhart 1). The reduction of investment in Ukraine by 2.5 times (compared with the maximum of 2011) occurred in 2015– 2016. Starting from 2017, the growth curve went up, adding about 200 million a year. There are three factors among the reasons for the relatively low investment
rates. First, there was no active trade turnover between Ukraine and Germany historically. Secondly, the German business is very cautious about the possibility of investing due to the military conflict in the east of Ukraine. Thirdly, the state structures responsible for the formation of an investment policy do not yet fully realize the need for a European development choice. On the one hand, they seem to declare the European cooperation vector, but on the other hand, people don’t take decisive steps towards implementing this.

А high corruption level is also one of the important factors negatively affecting the investment sector. That is why Cyprus takes the first place among the countries investing in Ukraine – these are Ukrainian funds in offshore zones (which take more than 25 % in the FDI structure). David Zaha, an expert of the German group of advisers to the Ukrainian government, commented on
this: “We have enough data to say that a certain amount of these investments are so-called ‘circular investments’ which means Ukrainian money which entered Ukraine through financial centers.” 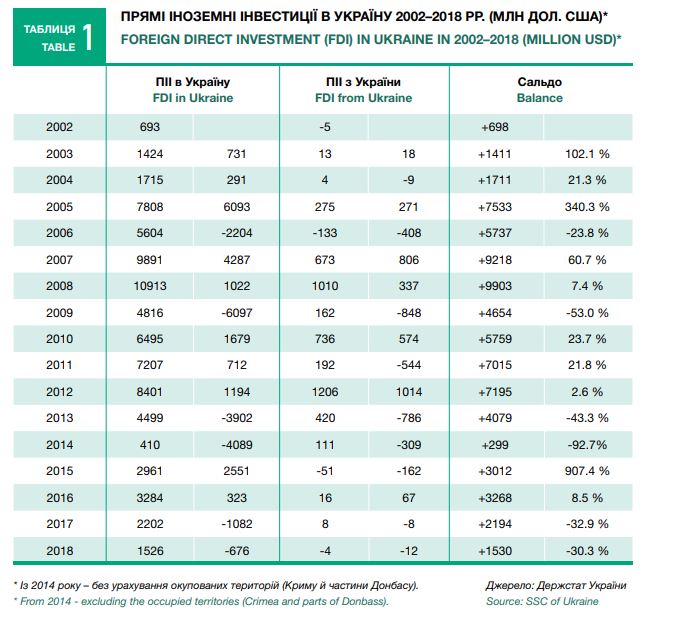 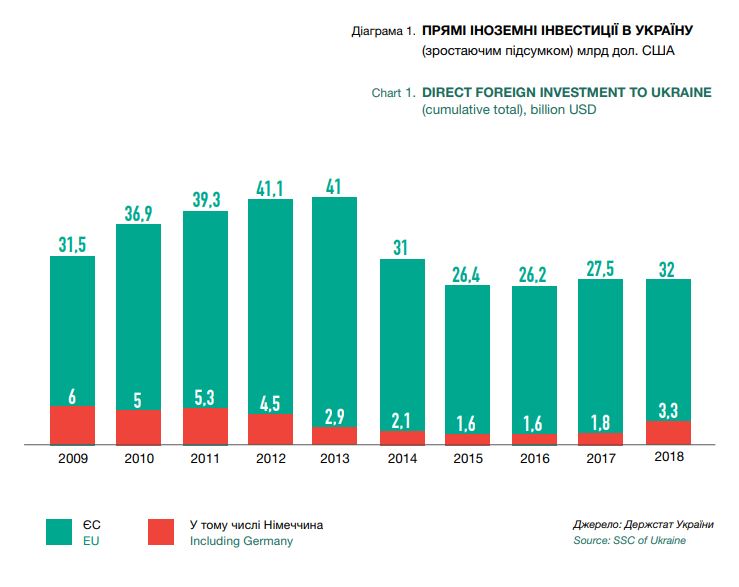 THE PRESENCE OF GERMAN BUSINESS IN UKRAINE

There are now more than 2500 German companies and their representative offices in Ukraine. More than 4000 thousand companies with German investments were registered here.

Germany demonstrated its interest in working in Ukraine with the opening of the German-Ukrainian Chamber of Commerce and Industry in 2016, which represents business interests and helps attract investment. This is an important step in enhancing economic cooperation between countries. 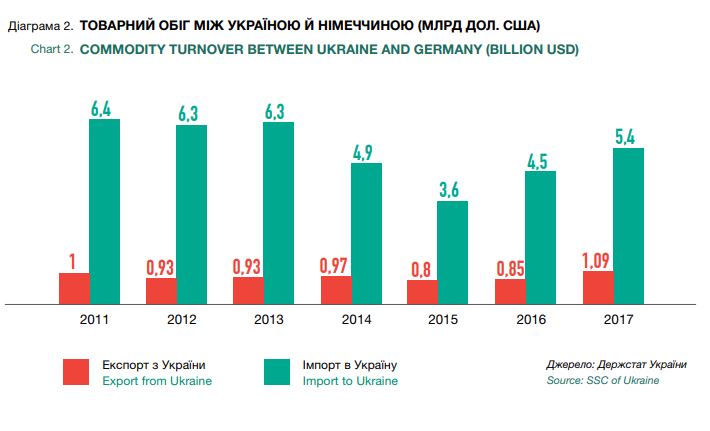 Working with a country like Germany, which budget surplus is higher than our country’s state budget, is very promising. However, the trade balance of the two countries is still scarce, mostly due to the war with Russia. If we take the highest point of German imports to Ukraine ($ 6.4 billion in 2011), having passed the minimum in 2015 ($ 3.6 billion) it became $ 5.4 billion in 2017 (Сhart 2).

At a meeting with German entrepreneurs in November 2018, the Prime Minister of Ukraine Volodymyr Groysman said that the actual goal is to increase the annual trade turnover between Ukraine and Germany to 10 billion euros, and there is an undoubted potential for this in Ukraine.

Ukrainian exports to Germany fluctuates within $ 1 billion and has grown recently. The most significant positions in the structure of exports are taken by supplies of electrical equipment and boilers, vegetable seeds, ore, clothing, and wood (Сhart 3).

The priority of import from Germany belongs to electrical engineering, fuel, pharmaceuticals, chemicals, vehicles, and spare parts. The indicators are not so high in the field of services — their export-import potential fluctuates within $ 500 million. 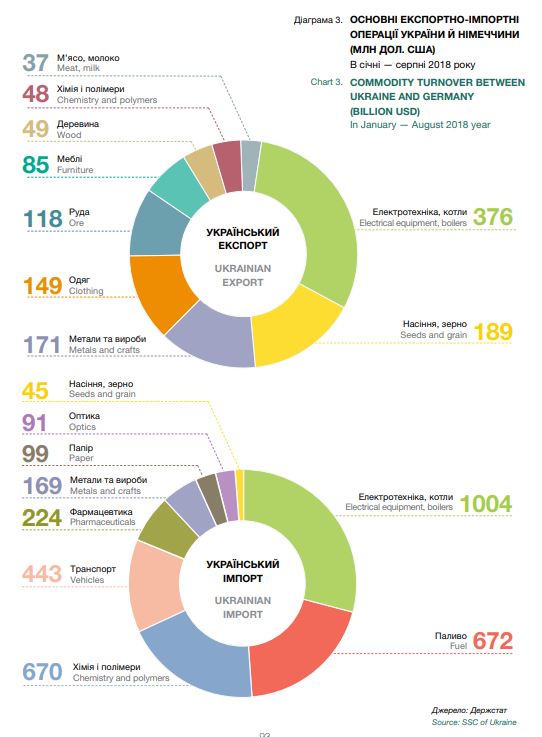 A FINANCIAL SKETCH ABOUT GERMANY

Germany’s GDP was $ 3.4 billion in 2017. The country had a surplus of the state budget and federal lands, municipal surpluses, as well as a surplus in social insurance cash desks, which is approaching $ 40 billion.

Germany is an export-oriented country (it sells goods worth almost $ 1.5 billion, takes the third place in the world). Its main sales markets are located in the USA,
France, and China, where goods worth about $ 300 billion are exported.

According to surveys in 2016, 94 % of companies did not withdraw investment from Ukraine, although in 2014, 28 % of German enterprises ceased operations in our country. 33 % of companies increased the number of their employees in 2016, and every second company managed to do the same in 2017.

Here is what the Prime Minister of Ukraine Volodymyr Groysman said about the prospects for German investments in Ukraine during his visit to Germany at the end of 2018: “What we heard today at the highest business level in Germany, there will be investments in the automotive industry, in the industry as a whole, in the agro-industrial complex. What’s more, there are already ideas of creating a complete automotive industry inside the country. We understand that we need to build a high-quality business climate to get more investment in the future.”

Today, Germany, like the whole EU, still does not perceive Ukraine as an equal partner. Our country is a sales market for developed European countries. It is a cheap and qualified labor force, as well as raw materials. This situation may persist for a decade without large-scale economic reforms in Ukraine.

At the interstate level, each country acts primarily in its own interests. Germany is no exception in relation to partners, including Ukraine.

In this regard, Germany’s migration policy can be a significant test for the Ukrainian economy. From 1 January 2020, Germany plans to simplify the visa regime for migrant workers in order to provide the resources for the economy. They are going to provide almost 2 million vacancies with a minimum monthly salary of 2000 euros. For comparison: Poland was able to attract about
2 million people from Ukraine by offering foreign workers an average salary of $ 500. In the case of Germany, we can expect a significant outflow of working-age population from Ukraine when it will be possible to legally earn four times more than in Poland and 10 times more than in Ukraine. According to experts, Ukrainian workers will occupy half of these German jobs.

An equally important test is facing possible consequences and contradictory prospects in case of lifting the moratorium on selling agricultural land in Ukraine.

We cited the number of operating enterprises from Germany in our country, which have their own capital. Their direct investment in Ukraine are a bit more than 1 % of the total amount that the German business invests abroad. We can assume that a relatively large number of companies and minimal investments are a kind of testing the peculiarities of the Ukrainian economy,
“adaptation” to it while anticipating major changes in a global economic sector. Lifting the moratorium on the sale of land (so far extended to 2020) if one of such changes, which has been debated for more than one year in the highest echelons. If this law is adopted in Ukraine, it will be natural that German investments will be targeted in this sector.

Let’s compare: the average cost of 1 hectare of agricultural land in Germany is around 20000 euros. The forecast price for Ukraine is around 5000-10000 euros. At the same time, more than 32 million hectares are used for sowing. Thus, if the land was sold today, its value would be from 150 to 300 billion euros.

Germany’s budget amounts to almost $ 3.5 billion, and foreign direct investment exceeds $ 100 billion annually. Obviously, this country is able to invest quite substantial capital in the agricultural sector of Ukraine.

Lifting the moratorium on the sale of land in Ukraine will surely attract investment from the United States (more than $ 300 billion of FDI annually), a number of Arab countries, China, Great Britain, etc.

Still, even if Germany acquires at least a tenth part of its agricultural land funds which are open for sale, this could be a serious test for Ukraine. This is so due to the historically and economically formed social order.

Unlike Ukraine, Germany has only 1.5 % of the working population involved in agriculture thanks to efficient technology and the rational use of resources. At the same time, it provides 90 % of the country with products. In Ukraine, 17 % work in agriculture (more than 16 million people), that’s why one-third of the whole population lives in rural areas.

The German investors in agriculture will begin their activities in Ukraine with the intensive introduction of advanced technologies, traditions and production methods. On the one hand, this will give a positive economic effect thanks to rationality and efficiency (as well as substantial tax deductions to the state treasury), on the other hand, this will lead to large-scale unemployment.

In this difficult situation, a lot depends on a balanced and wise decision of the Ukrainian authorities. Surely, we need progress in the agricultural sector, but this progress should be evolutionary. A revolution in agriculture today will lead to the desolation of villages and, as a result, there will be a sharp increase in social tension in the country.

The main deterrents to large investments from Germany are the socio-political instability in Ukraine (military conflict with the Russian Federation in Donbas, the annexation of the Crimea, the escalation of tension in the Sea of Azov), as well as a high level of corruption. Additionally, Ukraine does not yet have competitive technologies and production facilities which would be of particular interest to the German businessman. Still, lifting the moratorium on selling agricultural land will be able to attract large German capital. An investor can take risks even in the current environment after assessing the potential profit from the acquisition of Ukrainian black soil.

Of course, it is necessary to attract German capital to the agriculture of Ukraine, but only on mutually beneficial conditions, only gradually reforming the agricultural sector, and taking into account the interests of rural r