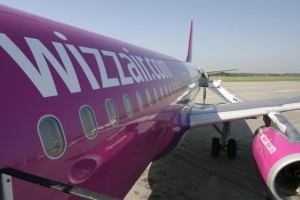 The Hungarian-Polish low-cost airline has decided to return to the Ukrainian market.

The Loukost Wizz Air is seriously considering the possibility of expanding its presence in the Ukrainian market. This was told by the CEO of the airline Jozsef Varadi in an interview to the  Polish portal fly4free.pl.

“We see that the situation in Ukraine is stabilizing, and from a business point of view, actually we are really like what is happening there now.  We are seriously considering the possibility of powerfully  entering  this market again”. – Varadi said.

The head of the airline explained that the decision to reduce the presence in Ukraine was caused by not only the active hostilities in the East, but also the falling national currency.

“It’s not even in the war, and in the falling hryvnia. In  a few months the number of passengers in Ukraine decreased by 30%”, – explained the CEO the decision of Wizz Air.

The former Minister of Infrastructure Andrew Pivovarskyi  wrote in a Facebook About  a possible return of the company to the Ukrainian market.

“Wizz Air said about  the desire to return to Ukraine because “there is a stabilization”. How much time I have spent on the explanation to experts that the question is in “economic” rather than in “policy”.

According to the Pivovarskyi, the most important thing  is to create equal conditions for all, and with the economic stabilization the aviation market will develop very dynamically.

The CEO of the airline Jozsef Varadi did not specify in what areas and when Ukrainians can expect the new flights, but already from  19 August the budget opens the flights to London from the Romanian city of Suchava  situated 80 km away from Chernivtsi.

It will be recalled, that from April 20, 2015 “Wizz Air Ukraine”, ceased operations. At the same time the airline has not ceased to operate flights to Ukraine.

Later, at the company stated that the decision of the Wizz Air to close their Ukrainian unit provided to get an additional profit in 2015 fiscal year (ended March 31) to € 14.5 mln.

According to Ilia Sahaidak – a deputy chairman of the KSCA, a building company CRBC from China intends to implement the “turnkey construction project” of Velyka Kiltseva Doroha, the track Nyvky – Brovary, and in addition, road interchange near the metro station Shuliavska. Sahaidak noted that the Chinese company in this matter demonstrates great skill […]