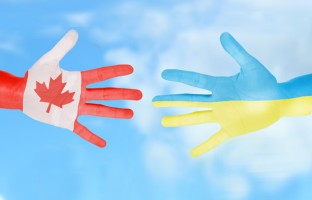 Today 11 July Ukraine and Canada signed an agreement about establishment a free zone. During the signing were attended the President of Ukraine Petro Poroshenko and Prime Minister of Canada Justin Tryudou.

Ukrainian MP Stepan Kubiv wrote on his page on facebook, it is a very important document for Ukraine. He will bring the relations between Ukraine and Canada for a new level.

As said the State Statistics Committee of Ukraine, in 2015 Ukrainian exports to Canada became less 2.4. He achieved turnover of 30.16 million dollars, imports increased to 7.7% and reached a turnover to 206,24 millons dollars.

Read more: What will change after signing Agreemnet between EU and Ukraine?

Closing a topic of legal relations registration niceties with the builder, we have approached to the last which  LDaily so-called as a”scheme” of investment attraction. It is apartment purchase through securities. This method deserves a special attention because it is simple, reliable and becomes more and more popular. Therefore builders practice the conclusion thicket and […]

The well-known British businessman Richard Branson said at the World Economic Forum, during a private event “Ukrainian lunch” in Davos, that he is ready to invest  in the Ukrainian startups, told Andrei Kolodyuk, the  partner of AVentures Capital, who visited the event. He also said that he talked to Branson and discussed the issue about […]

IFC has invested in the construction of “Yuzhnyi” grain terminal

On January 9, 2017 IFC’s international financial institution, which is a part of the World Bank, has approved the allocation of funds in the amount of $ 37 million for the construction of a grain terminal in the merchant sea port “Yuzhnyi” in Odessa region. At the moment, the parties are waiting for the signing […]