Главная › News › The company, which created a device for making your mood, came to Ukraine 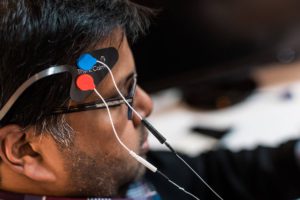 Boston startup Thync (California) that made the device to improve mood, came to Ukraine. R&D-office already opened in the river and there are developing a mobile part of the product. Investors do not tell us how many employees are working and how many people they plan to hire more. We only know that the number of employees will grow.

The entrepreneur Aisi Goldwasser and professor of biology and engineering of health systems Jamie Tyler established the Thync in 2011. They have developed a device with bluetooth-control, which allows you to get rid of stress and improve your mood.

In 2014 Thync raised $13 million from Khosla Ventures and Velos Partners and in 2015 was preparing to enter the IPO, but was unable to attract a new round of funding and nearly went bankrupt.

According to unconfirmed reports, the venture capital fund of a Ukrainian Maxim Polyakov Noosphere Ventures Americans saved from closure. In January 6th, 2016 the two companies closed the deal, but the amount and terms were not disclosed.

On Monday, PepsiCo announced its second fiscal quarter which ended on June 30. The results exceeded Wall Street expectations but were mixed. On the one hand, sales of food and snacks increased as consumers bought snacks for breakfast and home-made goods. On the other hand, sales of beverages decreased because large sales channels such as […]