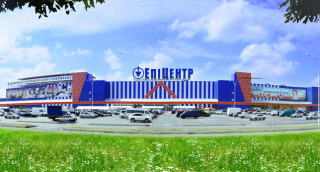 EpiCentre K  has bought the Alta Center TC . The object has been pledged to the one of the commercial banks and sold to repay the debt to the financial institution. There are no any official comments from EpiCentre K for this moment.

The complex is owned by VK Development – a developer unit of the Retail Group (develops a network of the “Velyka Kyshenya” and so forth). “Since the deal has not closed, we will provide a detailed commentary after the completion of the transaction”, – reported in the press serve of the company.

Alta Center  was built and took into use in 2004. It is a three-floored building with a total area of ??22 000 sq. m, of which 17,000 are leased. The initial investor of the Alta Center TC acted Briz-Invest Ltd., which was the part of  the Textile Contact group. Investments amounted to approximately $ 17 million.

In 2008, the Alta Center  shopping center was sold to Davento company, which owns a developer unit of the Velyka Kyshenya. The transaction is valued at approximately $ 50 million. Now the Auchan hypermarket is situated with Alta Center and it makes  a good customer traffic.

Alta Center TC is a shopping mall with a new fashion format, combining shops with the most famous brands in the outlet format with permanent discounts up to 80%. According to informed sources, the tenants of the Alta Center  must vacate the premises before 1 March, and the complex is closed from February 15.

Co-owner of the EpiCentre K network, Galina Gerega in autumn confirmed the emergence of a new project, but with no details and indicators. “We are building a new “EpiCentre”, but will implement the project in a slow mode, because we are using our own funds, – says Galina Gerega. – If the economic situation improves, it will be realized at the end of 2016”.

Now, the Alta Center  shopping center can be demolished for the construction of this project.

On Wednesday, April 28, the only currently operating third power unit stopped at the Zaporizhzhya TPP, DTEK’s press service reports. The shutdown occurred at 11:01 due to the operation of the turbine valve protection. “The reasons for the operation are being clarified. The power unit was disconnected without interruptions in the power supply of its […]

The ADM Company wants to invest in Illichivsk Commerce Seaport. It is reported by the press-service of the port. The ADM already has the working capacities in the port of Odessa, the company decided to take a part in the tender for the implementation of the  investment projects on the territory of the  Illichivsk Commerce […]