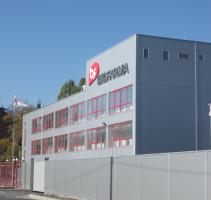 In 2015, the company built a plant for the production of probiotics, conducted a reconstruction of the station for a blood transfusion, as well as invested in the development of new drugs.

The Pharmaceutical company Biopharma (Kiev region) intends to keep the volume of investments in development at the level of 2015 – $ 12 million in 2016.

“In general, in 2015, our investments totaled $ 12 million. We plan to keep the same level for 2016”, – said the chairman of the board of directors, Konstantin Efimenko.

He said that last year, Biopharma invested $ 5 million for building a probiotics plant and $ 3 million – in the reconstruction of the Sumy blood transfusion station. Another $ 2 million were invested in the development of new drugs.

In addition, according to K. Efimenko in 2015 Biopharma renewed marketing and sales service.

“Now in our guide there are persons with experience in well-known international corporations. It is important today, as we launched a number of new products in 2015 and now we prepare new forms of already known our products, including nasal sprays, eye drops and suppositories. Probiotics are running in active promotion”, – he said.

At the same time,  K.Efimenko stressed that blood products are the priority for the company. In terms of money, the sales income is 40%.

Biopharma  is among the ten largest Ukrainian manufacturers of medical products. It produces more than 20 immunobiological preparations from donated blood and products derived from recombinant DNA technology and probiotics.

Megafon Company entered into a deal with Mail.ru

Russian operator MegaFon made a deal with Mail.ru shareholders to acquire a controlling stake shares of the corporation. According to official information, the purchase of securities was effected by signing the agreements with companies such as New Media and Technology Investment LP, New Media Technologies Capital Partners Limited and Ardoe Finance Limited, who are the […]