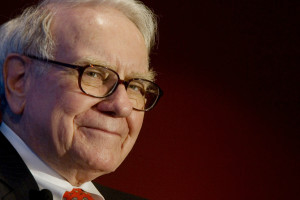 On Friday, Buffett’s Berkshire Hathaway announced that it has lost $2 billion on its IBM investment. That’s 15% of the more than $13 billion worth of IBM’s stock that Berkshire has purchased over the past four-plus years.

Berkshire says it is still committed to IBM, calling the downturn in IBM’s stock “temporary.”

Berkshire started purchasing the stock in the first quarter of 2011 and bought in full-force later that year, when the stock was on a tear.

The bet was looking smart for a while, as IBM’s shares soared to record highs in early 2013. But since then, IBM’s stock has shed more than a third of its value.

Buffett has famously avoided investing in technology companies, yet his giant stake in IBM makes it one of Berkshire’s top four investments. As shares of IBM have fallen precipitously this year, Buffett saw an opportunity to buy even more shares, recently ramping up his investment.

But IBM is showing little sign of a quick turnaround. The company has not managed well with the industry’s rapid transition to the cloud, playing catch-up to Amazon and Microsoft. The cloud business is growing strong, but hardware sales are in a tailspin, and IBM just reported its 14th consecutive quarter of sales declines.

Yet Buffett has insisted that IBM is not a short-term investment. He said more than four years ago when he started buying up IBM that he was in it for the long-haul.

Noticed, that Warren Buffett is the most successful investor of 20th century. He is chairman, CEO and the largest shareholders of Berkshire Hathaway.