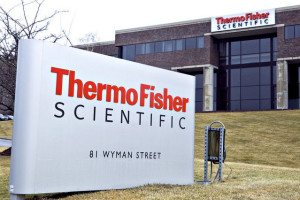 The largest manufacturer of equipment for laboratory research Thermo Fisher, conclude a purchase deal to buy the Affymetrix company, which develops integrated solutions for genetic researches, for $ 1.3 billion cash.

Following the announcement of the transaction, shares of the Affymetrix company sharply increased in price by 50%. Currently, Thermo Fisher estimates Affymetrix estimates at $ 14 per share, – reports Reuters.

According to informed sources, the deal will be closed in June 2016. The aim of the merger is to expand the spectrum of laboratory equipment, due to the fact that to production of Thermo Fisher will add the Affymetrix products, which include modern diagnostic equipment for hospitals. Also, the upcoming deal will help Thermo Fisher to reduce their costs in the amount of $ 70 million.

Thermo Fisher  Inc. is the largest American company, its activities are aimed at production   and supply of laboratory equipment for research and diagnostics. Number of employees of the company is about 50,000 people worldwide and its sales turnover in the year totals $ 9 billion. Thermo Fisher Scientific provides its services to over 350,000 customers of different institutions.

Affymetrix  Inc. is the company, which started its activities in 1992 in the United States. The company develops equipment for genetic researches and clinical diagnostics.

Analysts have a positive view of the deal and predict that the joint actions will help enterprises in the development of scientific researches in the field of genetics, and several times increase the income of the combined company.

Closing a topic of legal relations registration niceties with the builder, we have approached to the last which  LDaily so-called as a”scheme” of investment attraction. It is apartment purchase through securities. This method deserves a special attention because it is simple, reliable and becomes more and more popular. Therefore builders practice the conclusion thicket and […]

Japanese mobile operator SoftBank Group Corporation buys the british corporation – ARM Holdings Plc for 24.3 billion pounds ($ 32 billion). According to SoftBank, shareholders ARM Holdings could receive 1700 pence per share, which is 43% more than the value of the securities at the close of trading in London on Friday. Price of ARM shares […]