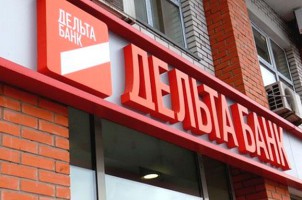 Deposit Insurance Fund (DIF) in the period of the interim administration and liquidation of insolvent Delta Bank recognized as negligible 175 deals worth 22.292 billion UAH.

According to the  DIF, in particular, to 11 business transactions, including the sale of the assets with the discount, or related parties, transaction of 12.2 million UAH were recognized as negligible, by treasury operations were identified three illegal acts on making contracts with the violation of currency legislation and baseless accrued interest. In addition, 157 transactions on credit operations were revealed, which are recognized as negligible. According to some of them were signed several agreements, such as the sale of credit with the simultaneous break on the mortgage agreement or surety, reports the FinClub.

The National Bank of Ukraine decided to revoke the banking license and liquidate the Delta Bank at October 2, 2015 at the suggestion of DIF.

The total amount of the bank’s obligations for physical persons on April 1, 2015 amounted to 28.97 billion UAH, including 18.18 billion UAH in foreign currency.

On January 1, 2015 Delta Bank took the 4th place (60.303 billion UAH) in terms of total assets among 158 operating banks at that time, according to the National Bank of Ukraine.

Shares of AstraZeneca are down 1.7% due to discontinuation of trials of COVID vaccine

Shares of the British-Swedish pharmaceutical company AstraZeneca on the London Stock Exchange (LSE) are down 1.69% after reports of stopping trials of the corona virus vaccine, according to trading platform data. Securities lost 1.69% in value, dropping to 82.07 pounds sterling. The basic index of the British stock market FTSE 100 on Wednesday traded in […]

Significant strengthening of the hryvnia against the dollar is due to four main factors. Vasyl Furman, Deputy Chairman of the Council of the National Bank of Ukraine, said this on the air of Ukraine 24 TV channel. “This is primarily an increase in prices in commodity markets, on the one hand, although, on the other […]