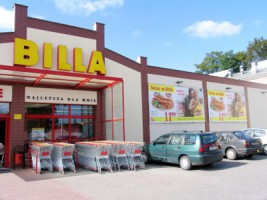 The “Billa-Ukraine” Company was restrainted the exploitation of the ground floor of an apartment house №27 on the Chornovil street in Kyiv, where on April 27, 2016 the opening of the supermarket was planned. This decision was concluded by the  Shevchenko district court on April 21.

As reported the initiative group of the residents, the court’s decision was the result of their action against the owner of the basement and against the Billa supermarket.

According to the construction documents in the house at Chornovil 27/ Zlatoustivska 55, parking is provided for the needs of the residents. However, as it turned out in March 2016, the owner of the parking does not plan to use the basement for its functional purpose, and in its place is suppoused to be the “Billa” supermarket.

The owner of the parking didn’t  confirm in court the legality of changing the functional purpose of the premises, say residents of the house. Besides, in accordance with the current legislation, the ground floor of the house cannot be equipped with a retail store with a total area of ​​more than 700 square meters, while the area which supermarket intends to occupy is 1109.2 square meters.

Also, under the current regulations, “filling of public premises, built in residential buildings, should be carried out from the ends of residential buildings without windows”, and Billa store is located under the windows of the residents’ apartments. The  power supply and ventilation systems do not allow the existence of the grocery store in the house.

The American satellite company Kymeta announced the attraction of $ 85.2 million in the last round of financing. The round was led by Microsoft founder Bill Gates, who invested $ 78.5 million in the startup. Kymeta develops and manufactures high-speed satellite systems and antennas. The main product of the company is a flat satellite antenna […]

Ukrainian banks have already issued UAH 8 billion in available loans under the “5-7-9” program. This was announced by Finance Minister Serhiy Marchenko on the talk show “Freedom of Speech of Savik Shuster”. “Today, 80 coins from the hryvnia loans are provided under the program of ” 5-7-9 “. UAH 8 billion and 3,000 loans […]