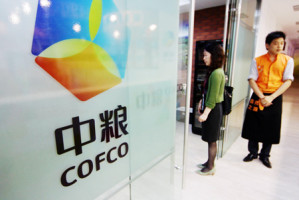 The Cofco Agri Ukraine Company, which belongs  to the Chinese Cofco Corporation is one of the largest global manufacturers and suppliers of agricultural products and foodstuffs, will officially launch the terminal in Mykolaiv sea port on May 19.

This is reported by the “Interfax-Ukraine” with reference to the company’s message.

This terminal is one of the largest Chinese investment in the development of the transport potential of Ukraine, it is a modern complex of transshipment agricultural products.

It will be recalled that the capacity of the terminal for handling grain cargoes is 2.5 million tons per year. Earlier, the cost of the project was estimated at $ 75 million.

Cofco is a multi-state organization, it conducts the purchase and trading of cereals, as well as carries out deep processing of grain. It also owns hotels, shopping malls and vineyards, as well as a joint venture with the Aviva Plc British insurer. The company was founded in 1949, it is one of China’s largest state-owned enterprises. Through a series of acquisitions the company now has assets for more than $ 71.9 billion. Grain storage capacity is estimated at 31 million tons, in processing – 89.5 million tons per year, and has offices in 140 countries.

On Wednesday, April 28, the only currently operating third power unit stopped at the Zaporizhzhya TPP, DTEK’s press service reports. The shutdown occurred at 11:01 due to the operation of the turbine valve protection. “The reasons for the operation are being clarified. The power unit was disconnected without interruptions in the power supply of its […]

The State Property Fund sold the distillery for UAH 60 million

The State Property Fund of Ukraine sold the Sukhodol distillery in the Lviv region to a private investor for UAH 60.3 million. This was reported by the state concern Ukrspirt, which included the company. The starting price at the auction increased 2.8 times, starting from UAH 21.7 million, Ukrspirt said. Sukhodolsk distillery became the sixth […]

According to Delo.ua, the European Bank for Reconstruction and Development (EBRD) represents the credit to Meest Express  of 10 million dollars on post automatic machine network development. The EBRD press-service informed about it.The postal and logistic operator will have  planned  to increase the share on the Ukrainian market and to develop the existent network until […]