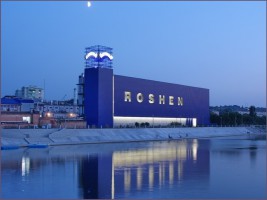 The Roshen Confectionery Corporation plans to invest € 25 million in the construction of the second stage of the Vinnytsia dairy plant. This was announced by the director of the plant Dmitry Roshupkin, – writes the  “Interfax-Ukraine”.

“We have already started designing the second stage, the first piece of equipment has been already in order. We plan, to implement the complement of the second stage by the end of 2017 and to carry out start-up operations in the beginning of 2018”, – said Dmitry Roshupkin.

According to him, when the  construction will be finished, the second stage will take 1.1 thousand tons of milk per day for processing. Production of dry products will grow the most.

“Initially, the plant was built only for the needs of the corporation, but the situation has changed and there is a need to sell not only to our factories, but to the other consumers. The capacity of the first stage was designed to process 600 tons of milk per day, the average for the year processed 550 tons per day depending on the season and on the market situation”, – said the director of the plant.

It is noted that currently the plant’s products are exported to more than 30 countries,  in the plans of the plant for the next month is the access to the EU market.  The main export items are milk, butter, milk fat. Approximately 60-65% of its dairy products goes toward  the needs of the corporation factories, the remaining 35-40% of the products are being sold, where 90% goes for export.

Erdogan announced data on gas reserves in the new field

The net profit of the German automaker Bayerische Motoren Werke AG (BMW) for January-September 2020 decreased almost 1.7 times year on year and amounted to 2.11 billion euros. Adjusted earnings per share were € 3.2 against € 5.37 a year earlier. Annual revenue decreased by 7.1% to last year’s level – to 69.508 billion euros. […]

Ferrari’s shareholders signed an agreement on protection from hostile takeovers

Large investors of the Ferrari – Exor and Piero Ferrari holding company, made a pact that will protect the corporation from hostile takeovers. Ferrari feared for his integrity after  it will be separated from the Fiat Chrysler in the beginning of the next year. Investors are joining forces to make all actions together and consulting […]